Bravely Default: Where the Fairy Flies Description
Bravely Default: Where the Fairy Flies, titled Bravely Default: Flying Fairy in Japan, is a Nintendo 3DS Role-Playing game originally exclusively released in Japan. It is considered by the publishers to be a spiritual successor to Final Fantasy: The 4 Heroes of Light, having the same initials as Final Fantasy with Flying Fairy and its job system has been compared to that of Final Fantasy V.
In this game, you control Tiz, a young boy who just lost his brother in an accident. He meets Agnes, who is on her way on purifying crystals to prevent the very same accident from happening again. Together, they embark on a journey, meet new friends, forms a party of 4 and saves the world…. Or what they were led to believe.

The story follows the archetype of the current Square Enix games, revolving around the central theme of crystals. While it is not terribly unoriginal, its execution is what makes it stand out from the other 3DS games. It is delivered mainly through voiced dialogue which helps in bringing the character alive and the choice of music is apt in expressing the mood of the situation during the tide of battle (The soundtrack becomes a indicator of how long your special move lasts).. The cues are also well placed, from new encounters, intense battle to sad partings.

When this music plays, you will automatically know it’s a boss fight

Lens of the Hero’s Journey Screenshot: One of the many light-hearted banters ingame

Bravely Default follows the standard fantasy archetype where, based on Vogler’s synopsis of the Hero’s Journey, it contains clichés like but not limited to

What starts off as a stereotypical story, slowly evolved into more than just any other fantasy story. The party of 4 began as one-dimensional characters but as the story progresses, their characters were fleshed out and developed beyond their initial archetype.

Bravely Default slowly transforms its story from the standard good-vs-evil to a point where there is no clear line between good and evil. This lens meshes very well with the next lens that I will talk about.

Through the usage of the structure provided by the Hero’s Journey, the interest of the player is sustained very well (at least, in the first few chapters). Being on a journey, the party will

The story presents itself in arcs and the interest slowly builds up with the suspense creeping up, with the villain’s occasional appearances, leading up to the final boss fight. In between chapters, they take detours to rest or power up, providing a respite of tensions. After every chapter, it is a whole new chapter but with a growing backstory of the main ‘evil’ organization making its moves in response to the party’s movements. This rollercoaster ride helps in retaining the player’s attention by giving both periods of rest and peak, with a grand finale to top things off.

However, Bravely Default overuses this formula in its later chapters. It suffers from what most Japanese RPGs have a problem in. A grinding process. In the second half of the game, the plot comes to a standstill and the player is forced to repeat similar events multiple times. A rollercoaster ride is fun but when rode too many times, it turns displeasing. Still, to its credit, Bravely Default stuck true to its world-building and even the repetitions have variations (or easter eggs) to help the player tide it over

Lens of Simplicity and Complexity

Partly what contributed to Bravely Default’s success is its job system. Each character (in your party of four) has access to the same 24 jobs, each with a slight inclination to certain jobs but not limited to. At any point of time, only 2 jobs can be equipped at the same time, one as a main, the other as a secondary. Screenshot: A overview of the job White Mage in the job selection wheel

A job itself is simple and focused on achieving a specific role, say White Mage is specialized for healing, Black Mage is specialized for offensive magic. As the player can freely mix-and-match the jobs, he is given the tools to come up with different strategies according to the natural synergies of the classes, rather than being force-fed them like a traditional RPG (where the heroes comes in a set class).

The battle system is also straightforward, with the typical actions and elements you can find in an RPG. An interesting feature would be its Brave and Default systems. By Defaulting, you skip your turn while defending, gaining a Brave Point. By Braving, you spend Brave points to gain an extra turn. You can also go into a deficit, when you use your future turns in one go, allowing one to strategize. Do I bide my time or do I go all-out, risking vulnerability if I fail to defeat the enemy. This is where the emergent complexity kicks in.

The version of Bravely Default I played was the updated version, where additional system controls were open to the player. Normally in traditional RPGs (like Final Fantasy or Pokemon), when the player wants to avoid or induce battles, they can only do so through special items that influence the encounter rate. Bravely Default allows you to adjust that rate directly without the silly process of buying those items (begone Repels and Honeys!). This freedom to purely enjoy the story or when to grind for the upcoming boss fight (which is made unskippable), is what I feel most games should have innately without a paywall.

Although the story is linear, and progression is one direction at the start, like its spiritual successor, Final Fantasy, the ability (or rather desire) to backtrack is unlocked past a certain point of the game, with fast travel.

Last but not least, what captivated me was the plot twists of this game. Bravely Default comes with multiple surprises on various levels. 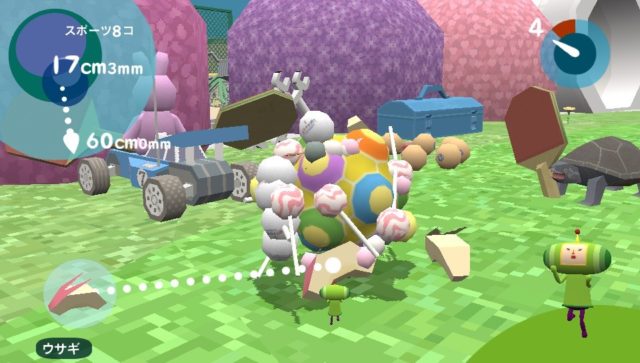 Katamari Damacy is a puzzle-action game developed and published by Namco. The game was a product from a school project from the Namco Digital Hollywood Game Laboratory, where its development was guided by three key points: novelty, ease of understanding, and enjoyment. The gameplay revolves around a character, called the Prince, that is tasked to roll up items with an adhesive ball-like object called a katamari.

In a level-based setting, the player controls the Prince who rolls the katamari around the map. Items that are smaller than the katamari will stick to it upon contact, while bigger items may cause items to fall off the katamari upon collision. The simplicity of its mechanism meant that players with any amount of skillset could play the game without difficulty.

The story follows the Prince’s mission in recreating the cosmos which has been destroyed by the King of All Cosmos’ in a drunken accident. With each completed level, the resulting katamari is sent into space to form either a star or a constellation. While the story has little to no bearing on the gameplay, the antics and eccentricities of the characters adds another layer of enjoyment to the game. The weirdness of the plot also sets the mood for the game in its quirky art style and surreal landscape, another factor that draws people to the game.

The game makes use of its colourful visuals and interactive environment to create a delightful experience. A noteworthy feature of Katamari’s aesthetics would be its use of scale. As the katamari grows, the perspective of the player changes in correspondence to the size of the katamari. A player that was rolling around a man’s foot at the start of the level could later be staring down at the crown of his head. The effect is a feeling of empowerment and achievement.

Katamari Damacy was developed for the PlayStation 2. The use of analog sticks made for easier control with the inclusion of more complicated movements such as quick turn and acceleration.

Katamari rewards its players on their progress with greater freedom. Each level was designed to limit the maximum size of the item on the map that can be picked up. As the player progresses through each level, a previous map may be revisited with an upgrade on the size limit, fulfilling the player with the gratification of rolling up a previously unreachable object. In some levels, a sufficiently large katamari could unlock an “eternal mode” which removes the time limit, allowing the player to explore the level to their heart’s content.

Each level in the game is sprinkled with oddities and humour through interesting placements of objects. This keeps the player constantly entertained throughout the gameplay. A royal present can also be found in several levels, which will be opened at the end of the level to reveal a piece of wearable clothing item to personalise the character. These elements of surprise keep the game interesting despite the repetitive nature of its mechanism. 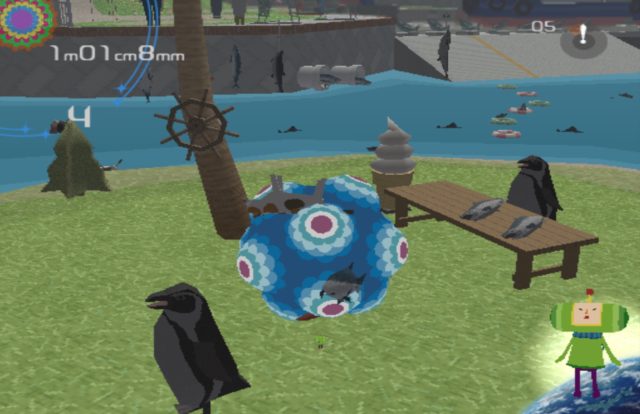 The game feeds on the inherent interest of the player in its mechanics and aesthetics. The game places the player in a fully-decorated map laden with opportunities of fun: interesting trinkets to collect and people to roll over. As the player moves the katamari around, the objects lying around the map constantly pokes at the player’s curiosity in wondering if they can be picked up.