Terraria is a sandbox 2D game with gameplay that revolves around exploration, building, and combat. The game starts in a procedurally generated world and the player starts with three basic tools: a pickaxe for mining, a shortsword for combat, and an axe for woodcutting, which is reminscent of classic resource gathering games like Minecraft. The world is open and large, and the player is encouraged to gather or spelunk for rare resources to craft better equipment, armor and miscellaneous items.
This game allows for different progression speeds, allowing players to either go slow, like designing their base or start building projects, or go fast, like speed-running through the bosses. There is a deep progression tree – beating one boss or performing a very specific action unlocks more things.

Asthetics
Terraria has a large number of biomes – from the underground jungles to sky islands to underground crystal caverns, each having their unique soundtracks, collectibles and themed monsters. 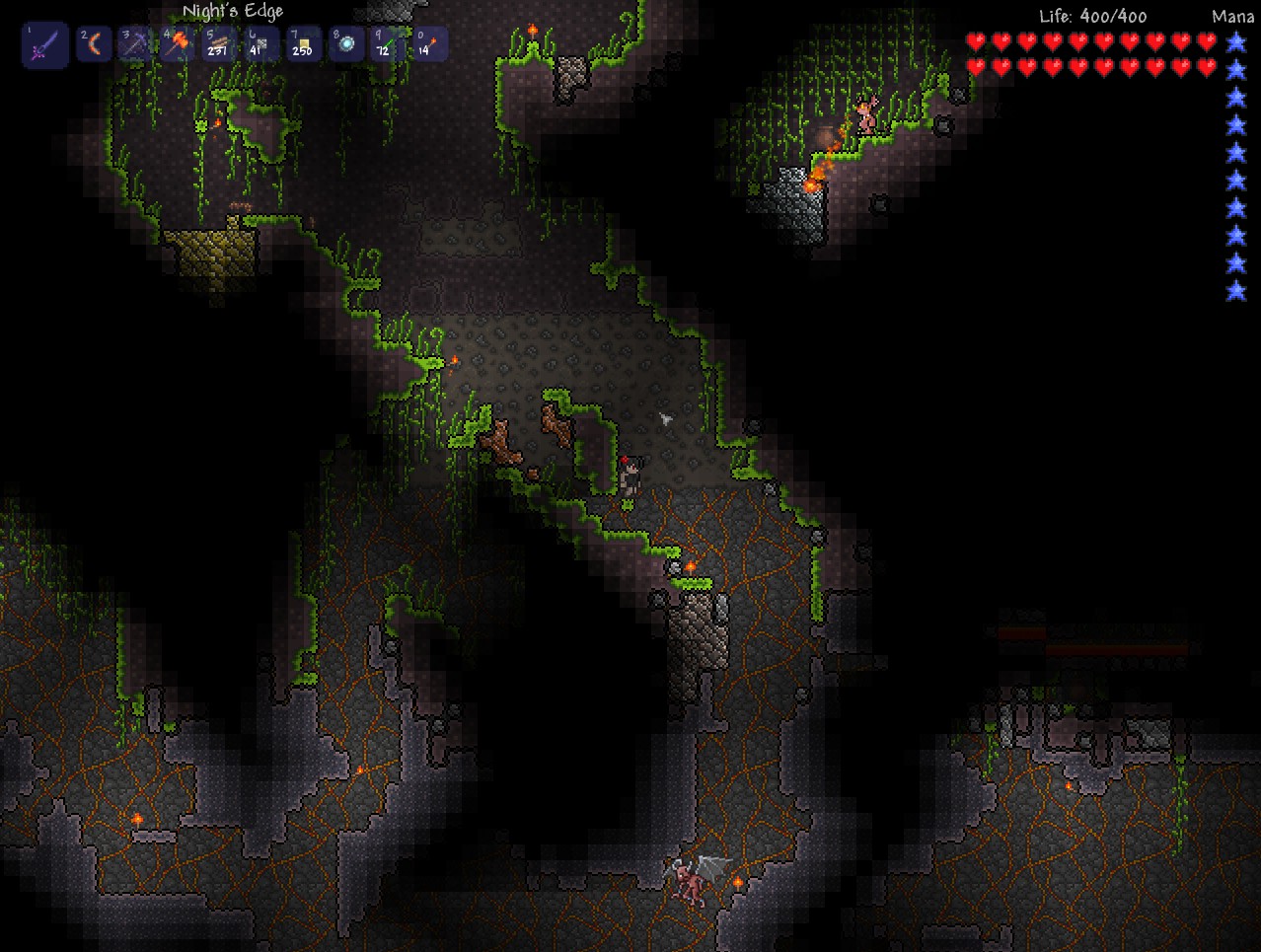 Technology
Terraria was initially available on Desktop, and has since been ported over to Android, iOS, XBOX ONE, and more. The nature of this game does not require any new tech, but rather the most efficient arrangement and controls settings possible to accommodate the large number of controls. In particular, the Mobile/3DS version has a subset of the controls, especially combat, and compensated for that by introducing auto-aim.

Mechanics
While Terraria doesn’t have that much of a story, it makes up for it by having a very progressive gameplay and intricate unlocking tree. There is a big range of the types of movement in Terraria, and much more so when it comes to weapons, armor, buffs and pets. When progressing through the game, the player would be tempted to keep switching weapons, because certain types are more effective against monsters in certain biomes. Particularly, some bosses are required to be beaten in their specific constrained areas. For example, Plantera requires the player to remain inside the Underground Jungle and Golem inside the Lihzard Temple summoning room.

One example of an equippable item set: Accessories provide certain movement upgrades, like running, walk on water, fly, triple-jump, wall slide or breathe underwater. There are also items which provide convenient effects like teleportation to base, equipped buffs or even quick-wiring that helps in building contraptions in game. The Tinkerer’s workshop, which is a service provided by a NPC that you discover in the underground caverns, offer the option to combine accessories under a crafting tree. The player will be constantly getting stronger throughout the game – gaining hearts, mana stars, movement upgrades, stronger weapons. The enemies that you avoid at the start might just be fodder to you later on. Additionally, your base will only keep expanding to accommodate for all the new items.

Perhaps, one of the more drastic changes that signifies a new checkpoint in the game progression would be the triggering of Hardmode difficulty, where new enemies are introduced to every biome and the evil biomes now spreads much faster.

Terraria is a game about discovery. The entire map is available to explore at the start, and the surface is generated such that there will be many interesting features to see, with landscape transformations like hills, sheer cliffs, canyons or potholes. The minimap that gradually fills up as the player explores the map certainly leaves the player wondering “What can I possibly find next if I go this way?”. Minimap of the Underground Jungle Biome in Terraria

There are a large number of biomes, of which some only appear underground or specific places and they vary in size. Multiple types of treasure rooms or structures appear randomly throughout the map, and is usually discovered by chance while exploring, often offering generous rewards.

Some things appear in place of another during level generation, so the player can even expect to see something new when generating and playing another level using the same character. For example, the Crimson and the Corruption are biomes that can never appear together in the same map. This applies to certain sets of end-game ores, as well as certain equipment.

Lastly, there are rare objects or collectibles (including furniture, banners, statues) that are only present in random structures all over the map, which the player can bring back for base building.

Terraria is an inherently exploratory game, where they can choose their playing style: from spelunking, fighting monsters, completing collections, make huge builds or just fighting boss monsters. This is because the major game checkpoints are player-initiated, with the exception of the earlier boss monsters or certain monster waves which they can trigger randomly. It might be overwhelming to a first-time player – you’d have to consult the Terraria Gamepedia all the time to find out what are the uses of certain items, crafting recipes to progress, what not to do and also how to progress. Common mistakes would be summoning Skeletron too early on, by talking a NPC that is easily accessible.

Terraria has a progression system which encourages the player to constantly seek to fight tougher monsters in order to get better equipment; rinse and repeat. With better equipment usually comes with them mobility and ability upgrades of the character. There is also a range of attack styles, like swords, bows, boomerangs, flails, guns, etc. The wide range of movements upgrades (as previously mentioned in mechanics) in Terraria might sound hard to master, but in order to traverse the unforgiving terrain, especially underground caverns where there might be steep drops, lava and monsters that can kill the character easily, that becomes a natural skill.

The boss fights in this game is quite challenging, some even requiring tons of preparation, and even building of an arena for the boss. But the more important requirements is to be grokking the bosses’ attacks. The player has an option of turning on “Expert Mode”, where it makes every monster much harder to kill.