Portal 2 is a first-person puzzle-platform game developed and published by Valve Corporation. It was released in 2011 and is available on both PC and console. In the game, the player controls the protagonist, Chell, to use a portal gun that can create two interconnected portals, to pass through a variety of dangerous laboratories and gradually uncover the history of the Aperture Science Laboratory.

The entire game flow can be roughly divided into three parts.
In the first part, the personality core Wheatley attempts to lead Chell, the protagonist, to escape from the lab, but accidentally awakened GLaDOS, she put Chell back into the lab and started a series of lab tests. In the later stage, Wheatley managed to reach Chell and helped her escape again. On the way they escape, the destroyed a series of lab infrastructure, and finally came to the room where GLaDOS is located. Then, they performed a core exchange, replacing GLaDOS with Wheatley as the administrator of the lab. But Wheatley suddenly changed his mind and dropped Chell and the wreck of GLaDOS’ personality core to the lab’s lowest level.
Then, in the second part, Chell saved GLaDOS, which was made into a potato battery, from a bird, and form a temporary partnership to get back to the lab and stop Wheatley from destroying the lab. They passed through many labs built in the early years by the Aperture Science, and discovered audio prerecorded by the founder Cave Johnson, which recorded the process of Aperture Science’s gradual demise. These recordings also helped GLaDOS knew her origin was the mind of Caroline, Johnson’s assistant.
Finally, in the last part, the duo returned to the modern test room, and completed a number of challenges created by Wheatley. When they finally met Wheatley again, Chell placed a portal on the moon, they were both pulled into space, but GLaDOS retrieved her and left Wheatley in space. GLaDOS learned a lot from Caroline’s remnants, but then deleted it. Chell was also released and sent to the surface.

In the single-player campaign, the player controls Chell to use her portal gun to move (almost) freely in the lab, making use of the items provided in the labs, like cubes, buttons or lasers to open the gate to the elevator and move to next level. As the game progresses, the type of interactable items in the scene also increases.
In the levels, there are also some items lethal to Chell. If she died, the game would automatically load from the most recent checkpoint, or the most recent elevator.
But one of the differences with other first-person games is that there is no falling damage, the official explanation is from Chell’s special shoes, which absorb the impact force.
With the help of her portal gun and the special shoes, she can do lots of things almost impossible in the real world. One of the most commonly used techniques is to use a pair of portals to convert her vertical speed into horizontal speed to get a long jump.

The three parts of the single-player campaign show player the first part of Portal 2 uses some maps from the Portal 1, but since in Portal 2, most facilities in the lab are no longer functional, these maps are often full of weeds, or scattered with bare steel bars, rendering a sense of apocalypse. In the second part, the environment is infiltrated with the traditional architectural style of the 80s, the walls, floors are all in color of bronze. While in the third part, it gets back to the modern design, but Wheatley’s crazy modification of the lab can be seen everywhere.

Portal 2 is developed using Valve Corporation’s Source 2 game engine. This engine is widely used among games developed by the Valve, including the Half-Life 2, Team Fortress 2, and one of the most famous FPS games, Counter-Strike: Global Offensive.
The hardware requirement of Portal 2 is very user-friendly, an antique Nvidia GeForce 7600 is already enough for the minimal requirement. It is quite affordable by most PC players at that year. For now, almost any graphics card can provide the highest visual experience of this game.
At the same time, Portal 2 can be played on most popular operating systems. Not until early 2014 did it released the Linux version.

This lens seems to be the core of Portal 2, since the whole game flow is surrounded by puzzle solving. Players need to use the portal gun, and to interact with the items in the scene, to solve one and another puzzle and find out the elevator to the next level. Although in this process, there would be lots of attempts and retries, and the players may feel confused when they are stuck in some levels, when they finally reach the elevator, they would feel a strong sense of achievement. It is this thinking-solving pattern that encourages the player to solve every puzzle in each stage.

Lens #86: The lens of community

In additional, the Steam workshop provides the community with tools to create their own levels, introducing new challenges to the advanced players. Players can freely make their own levels and invite their friends to play them, also, they can publish the levels to the workshop, and let more players to enjoy their imagination. There is even a production-quality mod of Portal 2 named Portal Stories: Mel, which tells the story happens between the Portal 1 and Portal 2.
Also, Steam community provides a place for players to share their gaming experiences, like the screenshot, the walkthrough, etc. Players can make friends in the community and invite them to play together, in the cooperative mode. 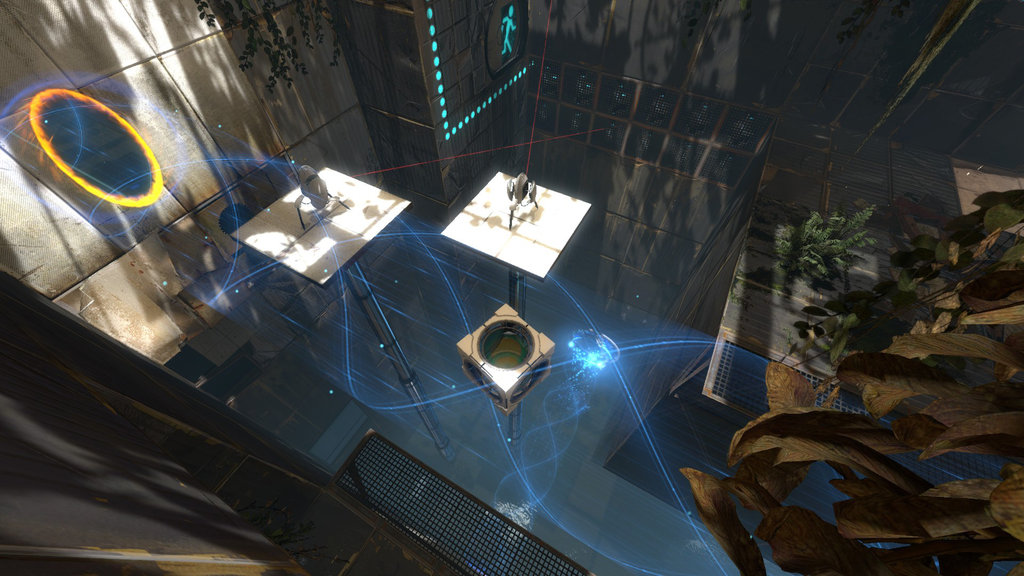 During the game process, the player is not alone. At the beginning and the ending of each level/lab, the narrator, either GLaDOS or Wheatley or someone else, will say something in a characteristic tone. The topics are also very wide, from jokes to the background of the story, players can always find some surprise from them.

Compared with Portal 1, Portal 2 has a complete storyline. The history of Aperture Science, the wake of GLaDOS’ humanity, and the betray of Wheatley, these all form the universe of Portal 2. At the same time, peripheral products like the comic Lab Rat, are also additions to the game’s background, providing players a more immersive experience.