Samsara Room is a point-and-click (and drag) mystery escape room game in the Cube Escape series. The player has woken up in a mysterious room and has to find a way to escape. The game encourages the player to explore the environment as much as possible to discover hidden secrets and ways that game objects may interact with each other. 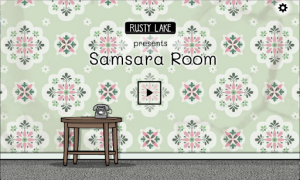 Elemental Tetrad:
Story:
Samsara, the title of the game, is a Sanskrit word that means “wandering” or “world”, with the connotation of cyclic, circuitous change (from Wikipedia). The game integrates this concept into the story well, with the player travelling between different interconnected worlds, while partly transforming into the creature that represents each world’s theme.

Mechanics:
The mechanics are quite simple: Point and click with dragging. Unlike most other escape-room games and other games in this series, this game allows the player to drag some items. Players are also able to click on some items to store them into their inventory to use them later.

Aesthetics:
The game has a simplistic but stylised art style which is reminiscent of paper cutouts. Each element of the scene feels like it belongs and the look of interactable items is well integrated. 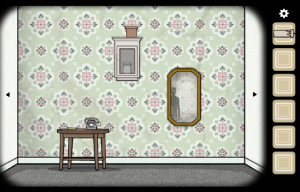 Technology:
The game was created using Adobe Flash and is available on PC, iOS and Android. It doesn’t require other special technology.

Other Lenses: (Lens numbers are based on the app)
Lens 2: Essential Experience
The essential experience of the game is to explore the world and solve puzzles to unlock new areas. The player can understand the aim of the game through the image of the cycle of worlds that appears at the beginning of the game and at many times throughout the story. After solving the first room, the player can make the connection through the picture that the goal is to find the four items that unlocks the portals and allows you to explore the five other rooms and eventually escape. 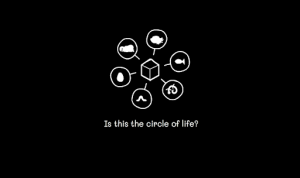 Lens 8: Problem Solving
Each object in the scene can be interacted with in some way. If the way of interaction is not immediately obvious, the player is led to assume that it is a puzzle with an answer that can be found somewhere else. Most puzzles require interacting with the items in a realistic way. For instance, later in the game, there is a squirrel which is holding a feather, which the player needs to move on. However, clicking on the squirrel does nothing, so the player would just move on and solve other puzzles. Later, after collecting other feathers, I realised that I had a sunflower seed, and I could make the connection that I needed to give it to the squirrel to get the feather. This style of puzzles makes solving each one feel satisfying and in my experience, there are no puzzles where the player is confused about the solution or that could be solved by guessing. 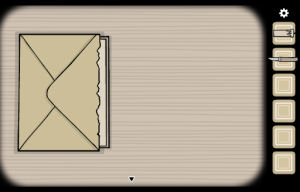 I used the knife to open an envelope

Lens 62: Transparency
In my opinion, the game conveys its mechanics to the player well. At the start of the game, unobtrusive test boxes near the top of the screen tell you that you can click to move around, interact with objects, and use inventory objects, and drag certain objects. The first room contains both puzzles that need clicking and dragging, ensuring that the player does not forget about the dragging mechanic, which is uncommon in similar games. Later on, if one mechanic doesn’t work, the player is able to instinctively try the other in order to be able to progress.

Lens 94: Atmosphere
Like other games in this series, Samsara Room has a creepy atmosphere, but doesn’t have many overtly ‘horror’ elements. It creates a sense of suspense with moving or flickering elements, such as the player’s black reflection, and the music, which also contains ticking noises to create a sense of urgency and dread. At certain moments during the game, the player’s click or action may cause a shocking item to appear, such as an arm, or a moon with an eye. As I knew other games in this series had more shocking images and even jumpscares, I felt tense whenever I knew I was about to solve an important puzzle, so I was immersed in the atmosphere even when what actually happened was not that scary.