Opinions on the game

League of Legends (LoL) is a multiplayer online battle arena video game developed and published by Riot Games for Microsoft Windows and Mac OS X, inspired by the mod Defense of the Ancients for the video game Warcraft III: The Frozen Throne.

League of Legends was the most played PC game in North America and Europe in terms of the number of hours played. As of January 2014, over 67 million people play League of Legends per month, 27 million per day, and over 7.5 million concurrently during peak hours. Currently, it has become one of the most played in Asia as well as the World Champions being Asians previously (TAIWAN).

The main game’s objective is to destroy the last structure on the classic map, the enemies’ “Nexus”. Other maps have differences in the rules and objectives, such as the map “Dominion” where the team’s Nexus will lose health when the opposing team has at least three of the five towers in their control.

This game is frequently compared with its counterpart DOTA. However, it is different from DOTA in many ways. Some of the ways are:

1. The Lens of Surprise

The mechanics of ganking and how the players utilises the spells on each characters to their benefit will surprise players when they play my game. Bushes along the lanes will allow players to hide from enemies to suprise each other. There is also Fog of War that only allow the player to see what is around his character or his team. Since this is a MOBA, different players can use their creatively to surprise the players themselves

2. The Lens of Skill vs. Chance

This is usually a more serious game as there are 5 people playing and if you
spoil the game it might result in spoiling the game for everyone else. Hence this is a game 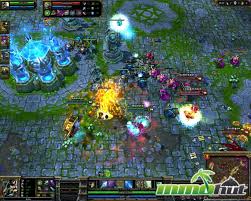 where the player should have a certain level of skill. However, there is always a custom games where players can train to play. The game is also tedious as there are lots of tatics to follow and adhere to. Adding more elements of chance does not enliven it as many believe this game to be based on skills. However, there are still some elements of chances that will surprise the players like % of stun chance.

3. The Lens of Cooperation This game focuses on team work to win and accomplish the mission. Each team has 5 players and there are different roles in the team (Carry, Support, 1Tanker) which makes a critical role in team fights. Each roles have different abilities to support, carry or tank in which they assist each other in team fights. For example, a Support Class Hero Soraka can heal her allies in battle by using her ultimate(Wish).

4. The Lens of Essential Experience

In this game, the essential experience that it provides to the players is the challenge of mixing up the skills and trying to predict the opponents moves and working together as a team to achieve the goal of the game. The length of the gameplay is determined by the status of the game. Only
when the team is able to defeat the other teams Nexus will the game end.
Hence, some player might be frustrated if this game drags too long due to the
difficulty of destroying the opponent’s nexus.