Earthbound is a single-player JRPG released in Japan on 27 August, 1994 and released in the United States on June 5, 1995. Also known as Mother 2, it was co-developed by Ape Inc. and HAL Laboratory and published for the SNES. Notably, one of the developers of the game was the late Mr Iwata. Although Earthbound did not perform well sales-wise overseas due to a somewhat satirical marketing campaign and a mismatch of market expectations, it managed to acquire a significant cult following due to its unorthodox writing and quirky gameplay. Eventually, word of the game spread out and Earthbound began receiving critical acclaim.

Earthbound tells the story of a party of four children – Ness, Paula, Jess and Poo – travelling on an adventure to try to defeat the evil alien Giygas (who has spiralled Earth into chaos).

It must be said that Earthbound’s visuals, even for its time, is average at best (comparing to releases in the same era such as FF6, Chrono Trigger, etc). However, Earthbound does extremely well in being able to portray a great amount of character and flair even with the simple and childish pixel art style.

A diverse bunch of characters.

Like many JRPGs, Earthbound contains a wide array of soundtracks but it also breaks free from the norm with some “weird” ones befitting its surrealistic story. All in all, the music is another one of Earthbound’s great features which is masterfully melded with the story and art.

Earthbound is part of the JRPG genre and thus, plays similarly:

But, it provides a few twists to commonplace mechanics. In battles, ‘health’ of a character is represented by a scrolling number wheel. Rather than instantly depleting health when taking damage, the number wheel scrolls down gradually – giving players a chance to rush to heal up his character before dying. Having fast fingers may help you turn around a fight!

HP and PP are represented as scrolling numbers, like a slot machine.

The crowning factor of Earthbound’s success. Many have praised the unconventional writing in Earthbound and having played it myself, I very much agree. Earthbound’s narrative is both comedic and bizarre in nature. Yet, this is not a boon in the game’s design. 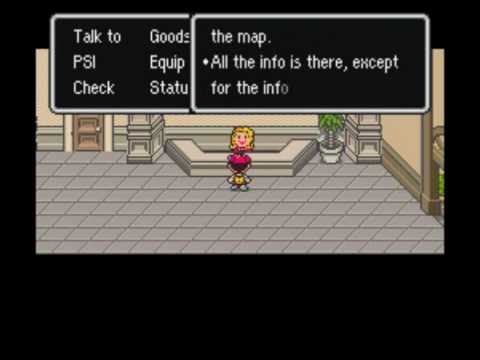 It provides a surreal adventure which tickles the bones of those tired of the standard adventure trope but also brings it all together with a strong unifying theme – bonds between people. Every character feels a part of this world, from the unhelpful receptionist bored behind the desk to the policemen punishing Ness for trespassing. (Earthbound is also unafraid of breaking the fourth wall as well.) The story of Earthbound takes Ness and his friends across many scenarios which can be considered puzzles. Combat is still a thing, but acts as a means to an end – solving the puzzles. In simpler puzzles, NPCs may send the party on an errand and one must figure out where to go and what to do based on the instructions given. In more complex ones, you may have to find and piece together clues to solve a code or figure out which sequence of NPCs to talk to in order to get the required item. 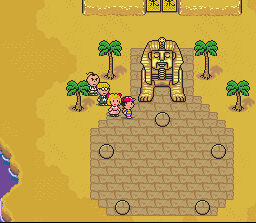 A puzzle requiring you to step the buttons in the right order.

Do not be fooled by Earthbound’s child-like appearance. While it seems marketed for kids to play, under the layer of flowers and sunshine lie some adult themes such as depression, abuse, corruption, cults, xenophobia, innuendos, etc – a parodical, tongue-in-cheek representation of modern society (at that time, maybe even now). This juxtaposition from the common expectation provides a interesting twist to the game and fits well with the imminent doom from Giygas, as if letting us be aware of the evils of the world we have today. Perhaps, there is a hidden lesson to be learnt here. 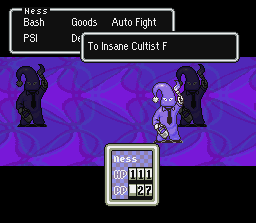 We know what they look like, let’s not talk about it.

Besides having big twists in the story, one would also never expect a creature coming out of a Lovecraftian horror book to appear at the end of such the colourful and quirky game we played for the past 30 hours. 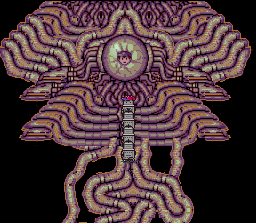 The adventure takes our four heroes on a sprawling journey through many settings, littered with encounters with characters of all types, aliens and dinosaurs included, each with their own unique personalities. Many of these characters are inbuilt into the story in different manners, making each obstacle faced by our heroes special in their own way. In some cases, species have funny traits. For example, the tribe of Tendas who are extremely shy and the Mr Saturns who speak in extremely disjointed english (accompanied by a bonkers dialogue font!). In my opinion, these minor oddities really build up the characters of the NPCs and make the game as a whole feel that much more alive (and strange). 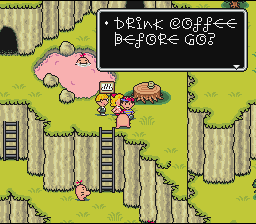 Mr Saturns and their weird talk.

Bonds have always been emphasized throughout the adventure in Earthbound – bonds between family (and dog), bonds between friends, forging new bonds with strangers. Rather than a mystical book or a shining light, the save spots in Earthbound are telephones where you talk to your father (who is unseen in the game, presumably a mimicry of the work-centric culture in Japan) for a bit before saving. Ness would also become ‘homesick’ (a negative status effect in battle) if he has not called home in a while. As a result, when I played through it, there was a small sense of melancholy as I empathised with Ness being away from his family for such a long time. 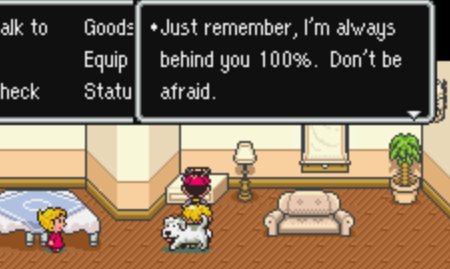 Even after the world is saved and the game is over, new dialogue would be written for many of the NPC’s, particularly those whom you have bonded with along the journey. For me, it served as a bitter-sweet conclusion to the game as I had only a little time left before I had to part ways with the characters which grew on me as well as the adventure I took playing the game. 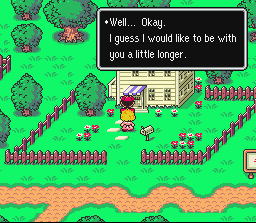 Earthbound is a great game than lasted throughout the ages, inspiring many popular games such as Undertale, Lisa, Off, as well as tons of fan games. It is absurd, strange and crazy – and that’s awesome.