Introduction
The Warcraft III series consists of its original starter base game (Reign of Chaos, released in 2002) and its more widely known expansion (The Frozen Throne, released in 2003). It is a fantasy real-time strategy game created by Blizzard Entertainment and has been well known to be the spark of the WarCraft universe that led on to the creation of the widely popular MMORPG, World of Warcraft. During its prime, WarCraft III was known to be a competitive game and had several eSports (as we know it now) competitions held for it. More importantly, the game’s bundled map editor provided endless versatility for game enthusiasts to create a wide variety of experiences and gameplay which allowed for many mini-games within itself, some even growing to be even more popular than itself (Defense of the Ancients [DotA] and now DotA 2).

Here’s the link to some footage of the gameplay:

As I review this game, I refer to playing the Campaign and standard gameplay according to the original game and not custom maps made by the community.

Breaking the game down with the Elemental Tetrad:

Analysis through other Lenses:

#31 Lens of Challenge
The game had varying levels of challenge as it not only had AI that pretty much straight up cheated for an edge, but it also allowed for LAN competition where human players play against each other. So whether it was in the Campaign or Multiplayer (through Battle.NET), we were sure to have a suitable level of difficulty. I agree that all games should try to use multiplayer to create that variable level of difficulty but I like how WarCraft makes sure that there is the fallback option of a good and challenging AI.

Crucial to any real-time strategy game, the game permits you to spend resources in any way you seem fit to surprise or counter your opponent’s army composition. WarCraft III makes the important design decision to place a higher population resource requirement on strong individual units that makes sure that no one can snowball the game out of control with the mindless accumulation of them. This ensure that there is no straightforward dominant strategy in the game (except for extreme ones that competitive players come up with).

#46 Lens of Economy
Of course, as mentioned above, this game is all about spending resources in the game’s economy. Securing of resources must be fought for and the thoughtful spending comes along with it as resources are rather scarce in the game. WarCraft III has this unique economic design called upkeep that basically reduces the income as your army rises in population. I believe this was meant to reduce snowball rushes with armies but what it means is that players are given the option of risking expansions early on, which ultimately provides more avenues of gameplay.

#01 Lens of Essential Experience
Ultimately, I think WarCraft III caught my attention because through the campaign, I could resonate with the heroes going through their struggles in their conquests. 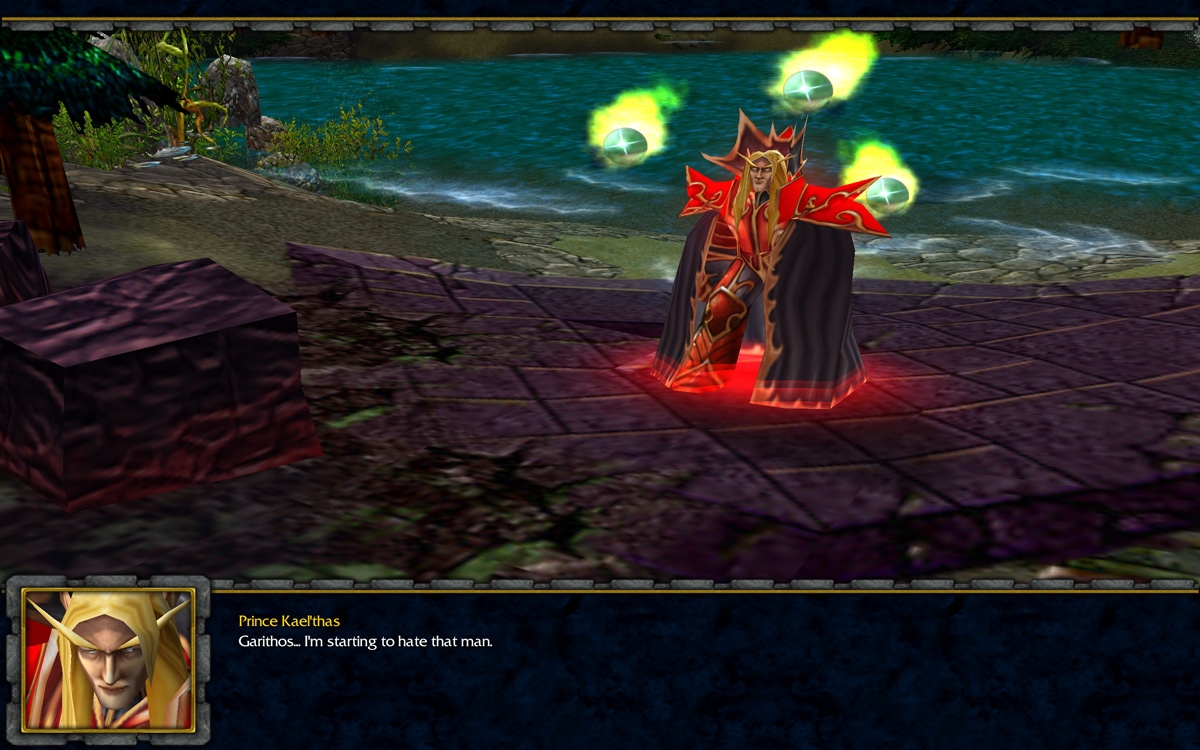 The game does so with effective storytelling, unique and personalised characters and managing to capture the feel of leading troops into battle for their own agendas. The whole real-time strategy genre really fits into the theme and it ultimately creates an story-telling experience like no other that I have felt before.