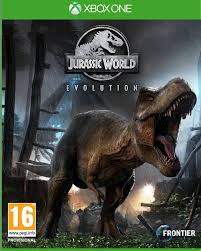 The game’s primary objective is to build a 5-star park with dinosaur attractions. The park planning is all around the dinosaurs, from fossil excavation to park amenities placement.

[Random comment: The name of the game doesn’t really capture its essence. When I see the word ‘evolution’, I think of ‘Evolve’, a PvP survival game.]

With a setting that has a close resemblance to the Jurassic Park and Jurassic World movies, this game is really meant for Jurassic Park fans.

The player builds the park on the same islands in the movie, with the same attractions, dinosaurs and more. Famous characters come together to tell a story as you progress in the game. If there’s any detail which the player missed in the movies, they are likely able to find it here. 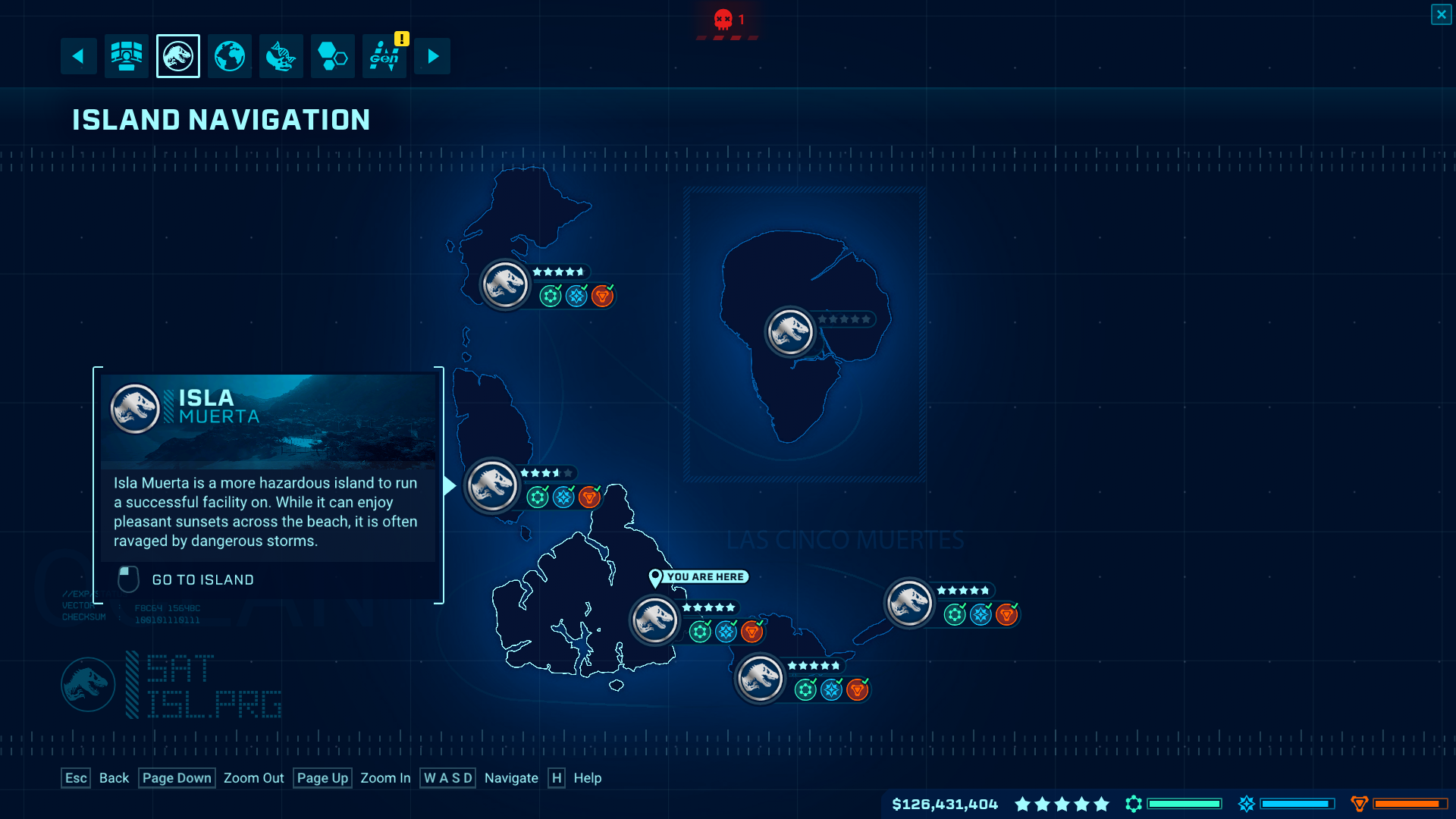 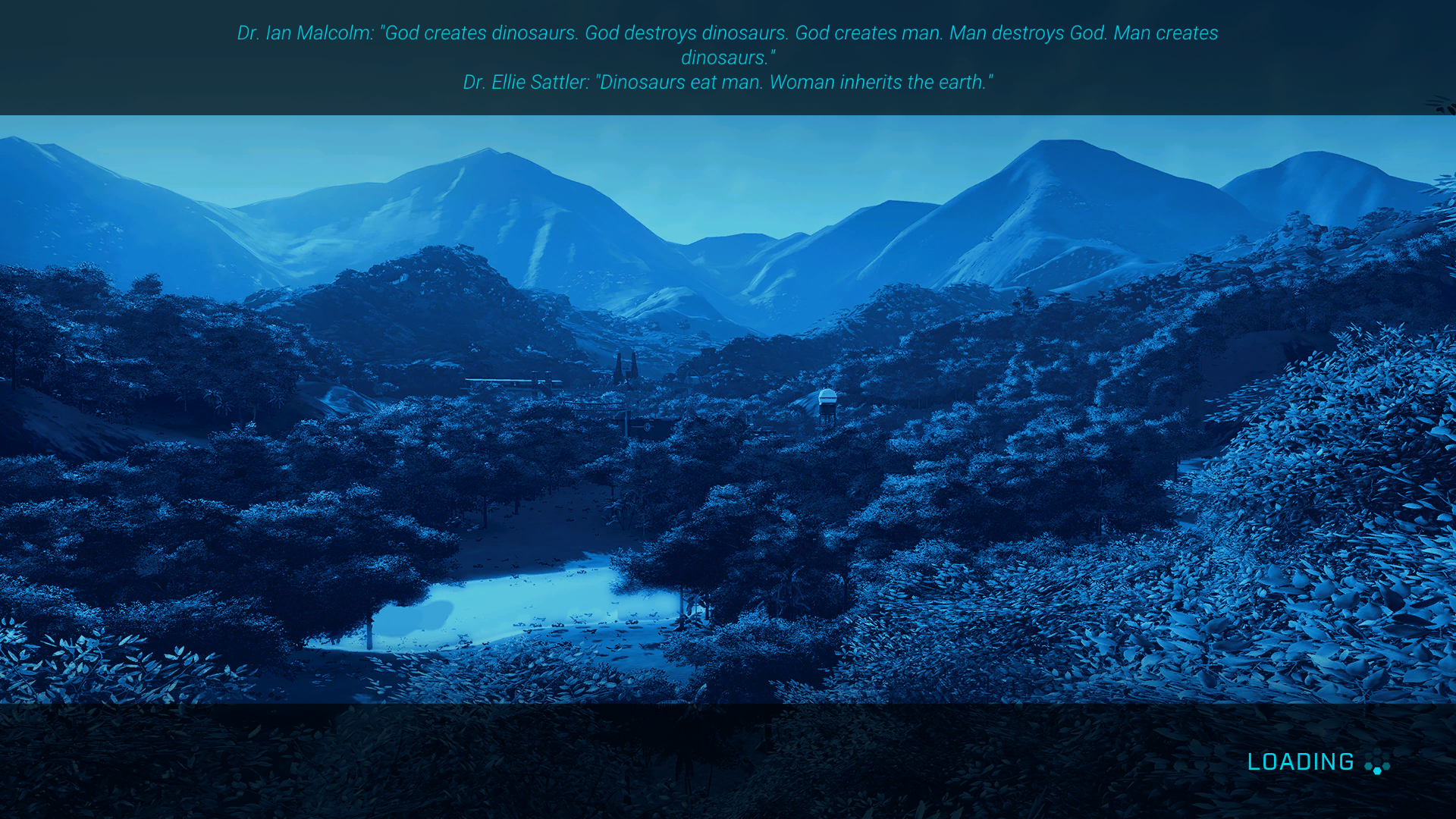 They even turned the games’ weakness into their strength: long loading times. Instead of keeping the players waiting, they sometimes flash quotes from the movies, which jogs the players’ memory of the movie and helps to keep them emotionally engaged while waiting. 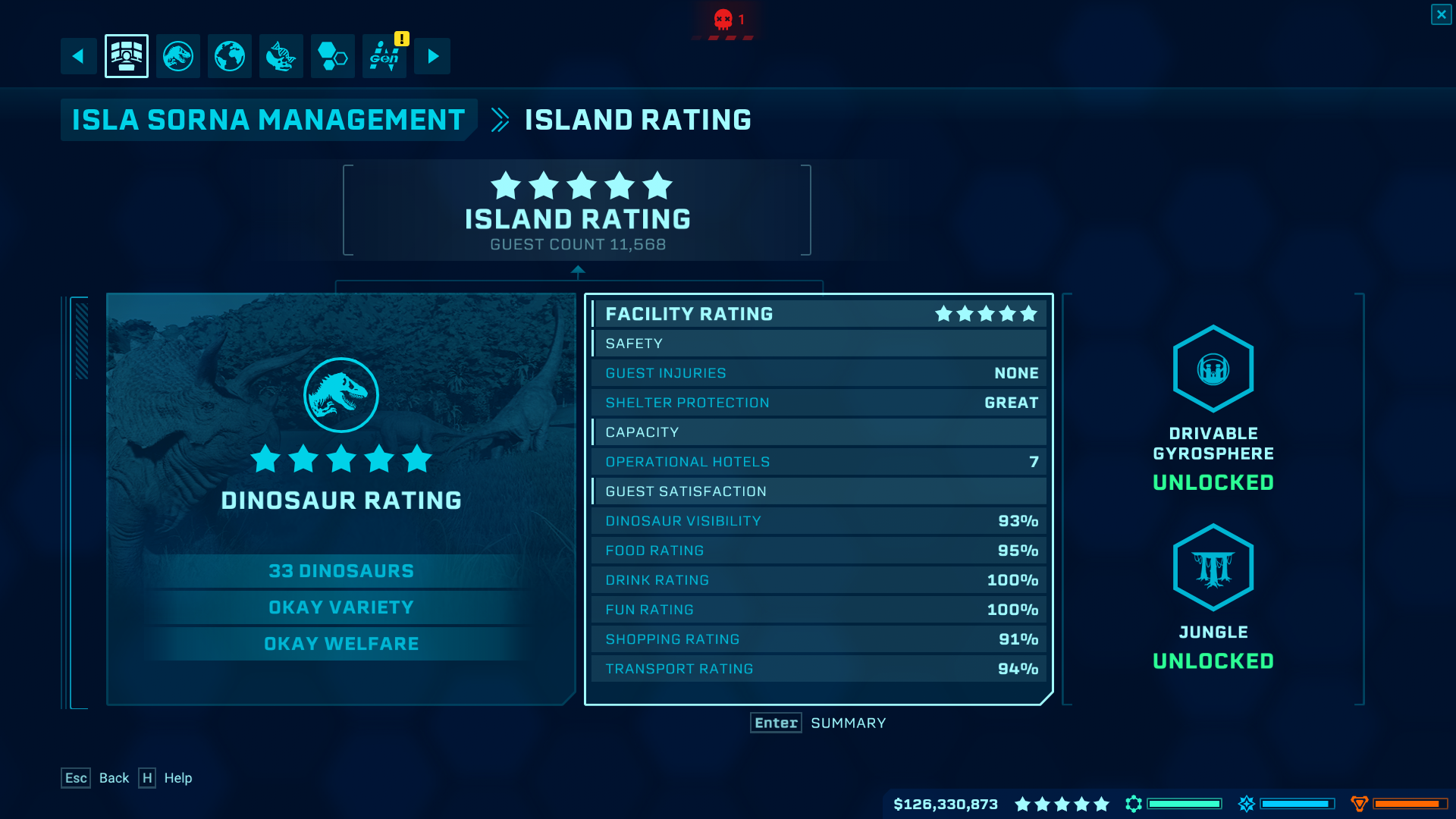 Although the game’s objective is to build a five star park, but actually to get your visitors to really like your dinosaurs. On one hand, out of the 2 components of park rating, dinosaur rating is usually the limiting factor as it starts off really low. On the other hand, good facility rating is easy to achieve, as long as the amenities around your dinosaur enclosures have variety and are well-planned. 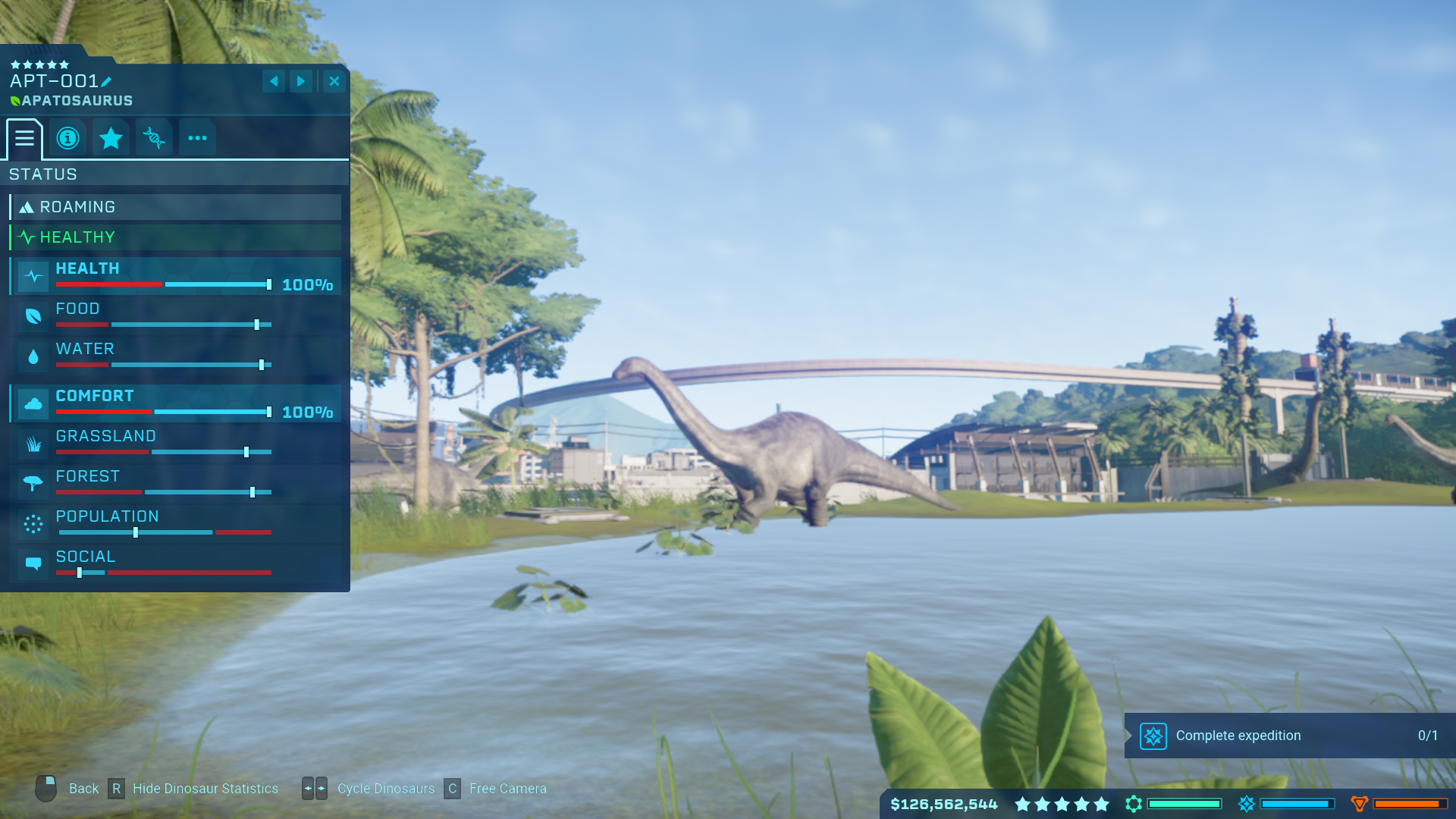 Other than just focussing on park building, the game actually forces the players to go into many details, such as the various stages of acquiring the dinosaurs. You have to unlock dig sites, excavate fossils, extract dinosaur DNA, research genes, modify your dinosaur genome, and finally incubate it before a 5 star dinosaur is actually released. Any dinosaur that stops short of any of these stages will give subpar ratings.

Now that the player finally gets down into the business of building their park, something ‘interesting’ happens. 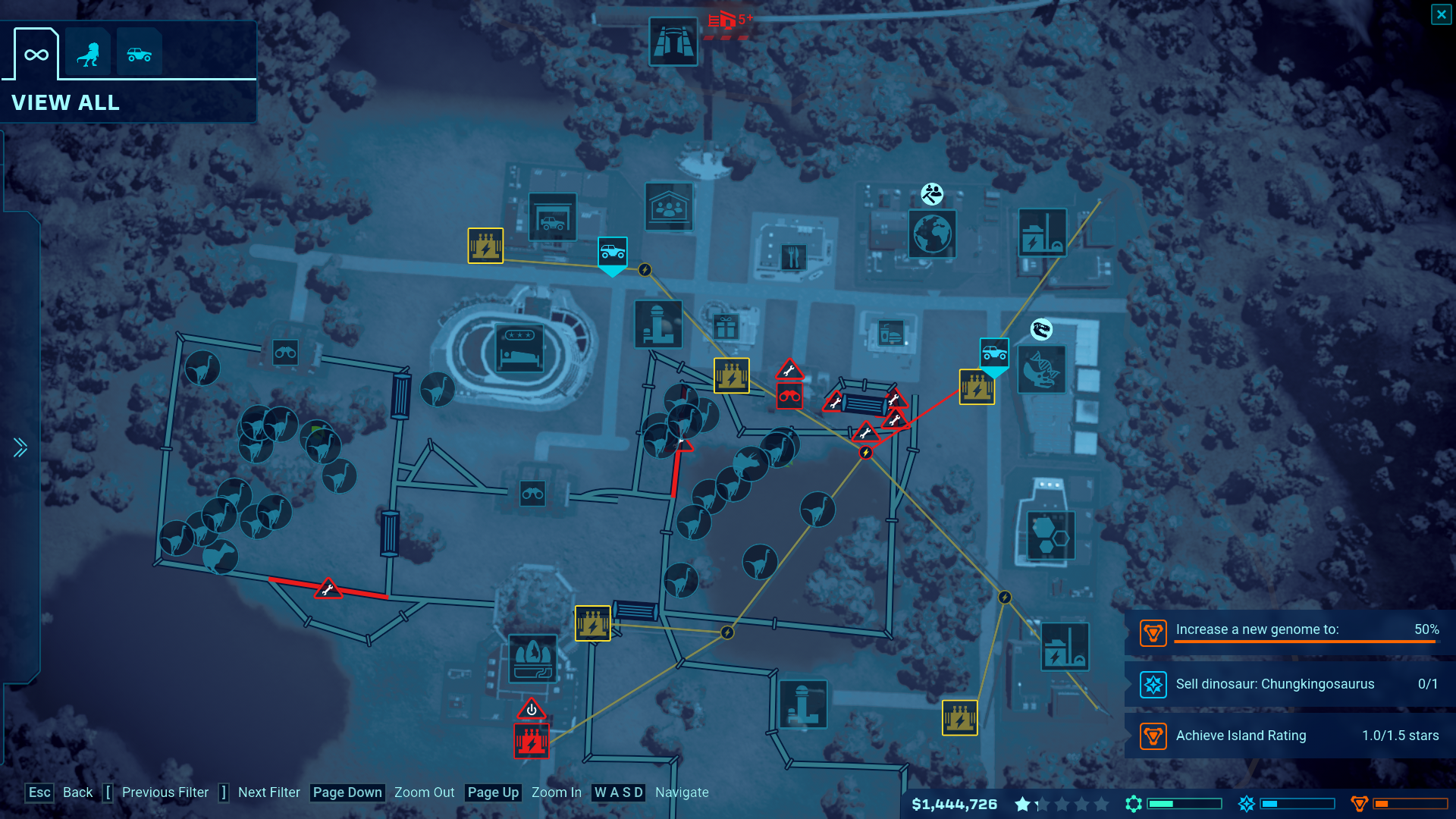 With Dr Ian Malcolm narrating the base story of the game, you can be certain that there will be ‘chaos’ in the game. The game teaches the player how to get a park up and running, but does not warn them about the things that can ‘go wrong’.

Most of these events are familiar if they have watched the movies: Tyrannosaurus fence break, tornadoes, sickness, even sabotage (to as early as the first movie’s Dennis Nedry), and they can all happen when the player is not paying attention.

Success means many different things to different players. Beneath the ultimate goal of building a 5-star park, there are many different statistics that can measure success, such as dinosaur variety, highest combat victories on dinosaur, guest count, profit. The list is quite long.

The player also builds the park for different contexts. At the start of the game, Dr Ian Malcolm issued the players with the challenge of the ‘5 deaths’, which refers to the 5 islands which the player is tasked to build the parks on. There is also a speedrun mode available for players up to the challenge.

The game boasts of rich graphics, complete with music and ambient sounds depending on what is happening and what you are doing.

Behind your park lies the backstory of Jurassic Park, Hammond’s dreams and aspirations. Characters directly interact with your park through missions. 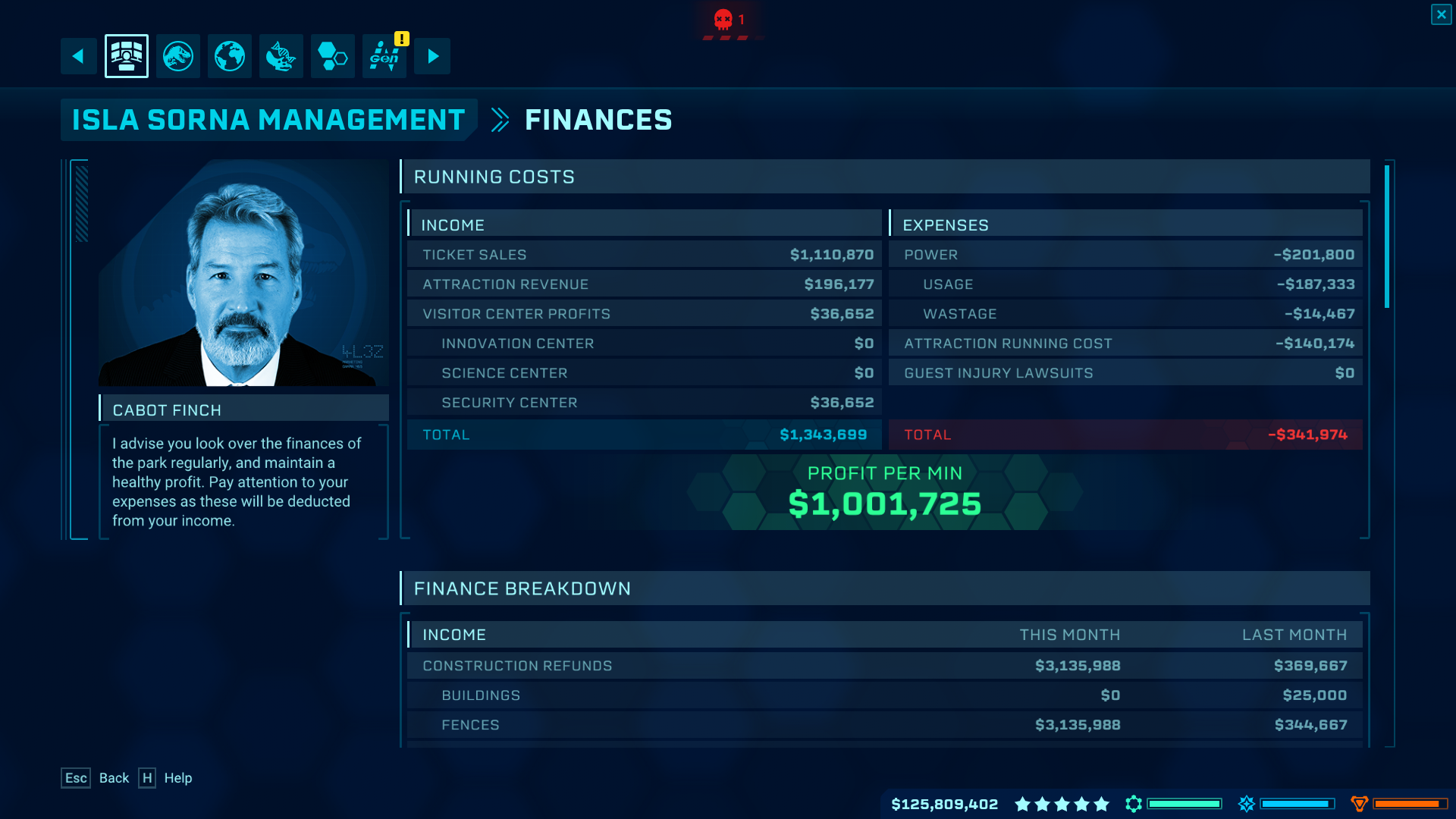 The player only has to focus on building the park and rating, visitors and profit will automatically follow. The game takes care of the movements and behavioural patterns of each visitor that enters the park and evaluates their spending and satisfaction scores into rating and profits. 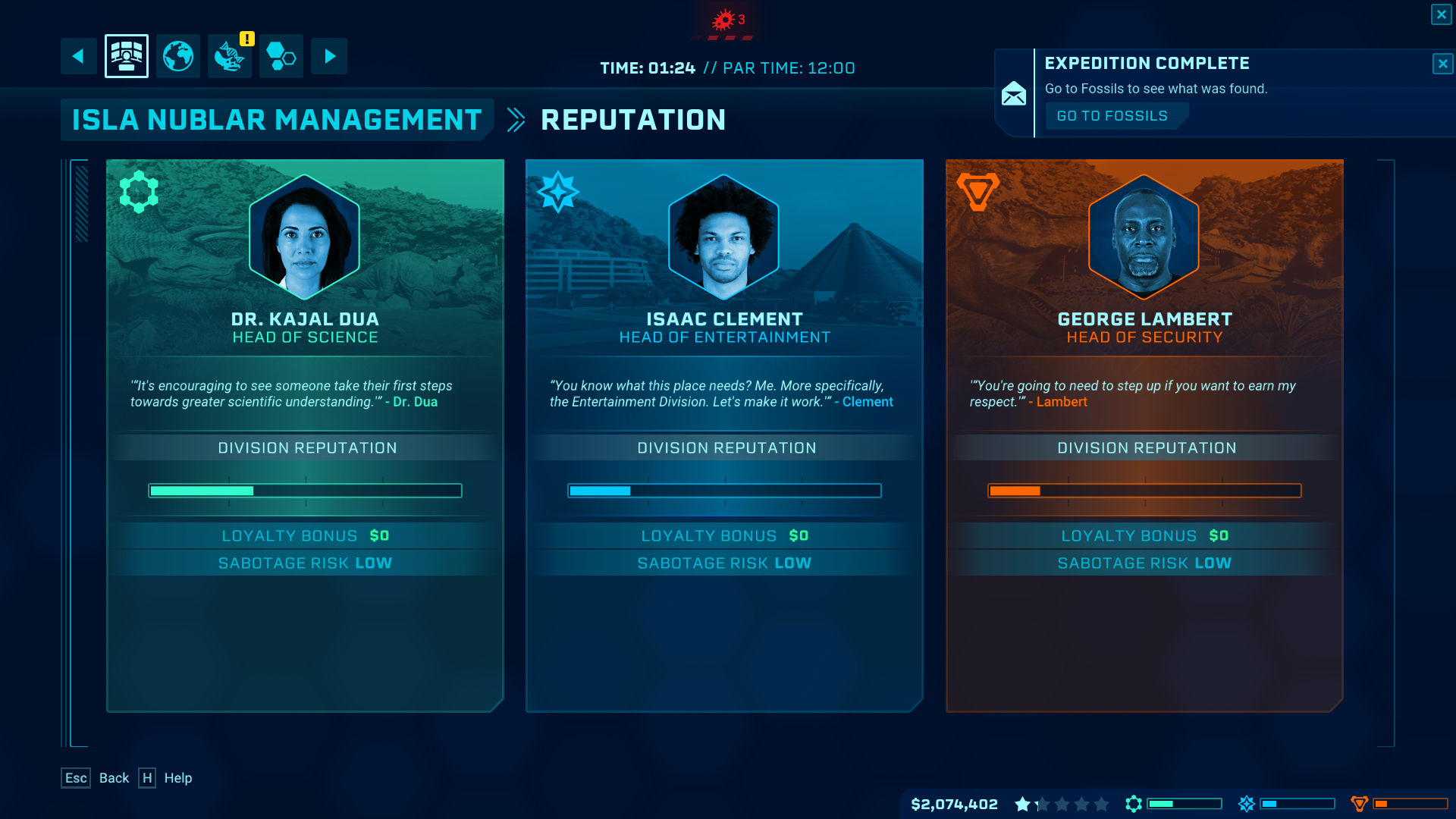 Dr Ian Malcolm likes to talk about balance and chaos, and our game has 3 active agents that demands your attention. Storms and tornadoes come and go.

Of course, these require a rather powerful machine.