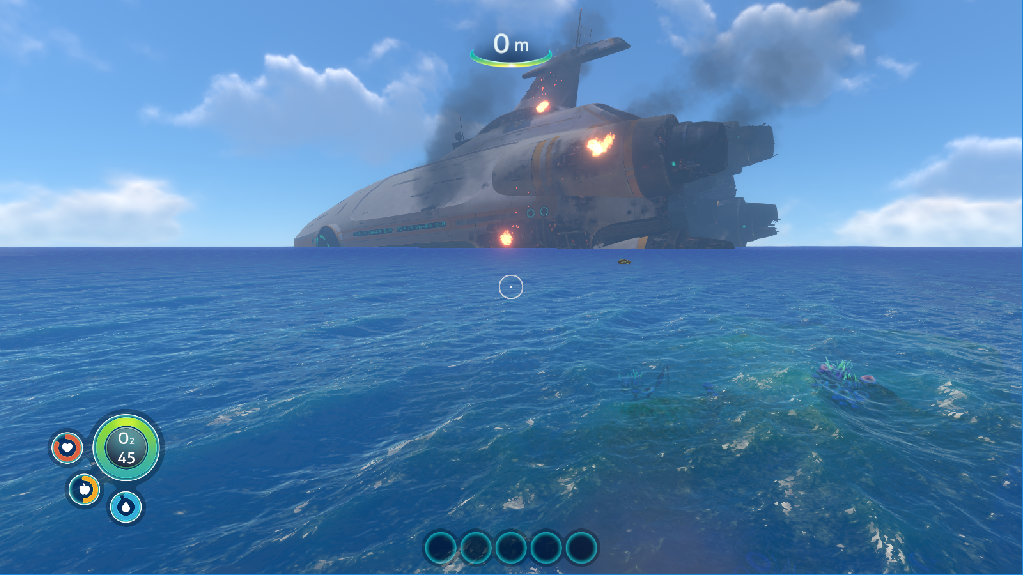 Subnautica by Unknown Worlds Entertainment is a first-person, open-world survival-adventure game whereby most of its gameplay takes place in the ocean of an alien planet. The player is encouraged to explore and interact with the entities and objects found in multiple underwater biomes in order to secure the means of survival and learn more about the unknown waters he/she is surrounded by. Click here for gameplay trailer (warning: video starts with rather loud explosion). 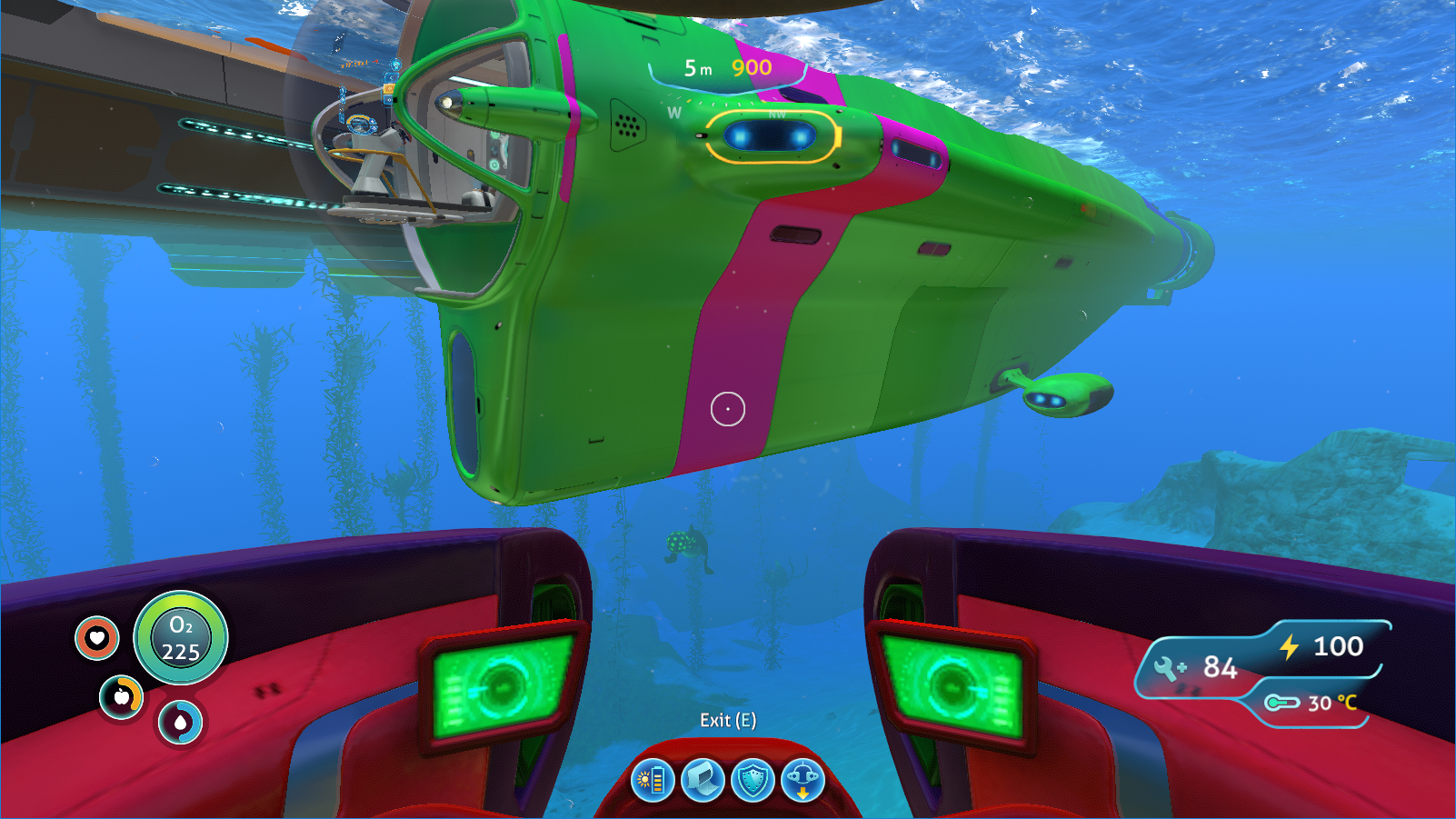 It is currently the late 22nd century and humans have begun extensive space exploration to colonize alien planets. The “Aurora”, a spacecraft constructed by the trans-gov Alterra was shot down while passing near Planet 4546B on a mission and crash-landed onto the planet’s watery surface. The player takes on the role of Ryley Robinson, a survivor of the crash, as he explores his surroundings and searches for possible survivors and a way to escape the planet. He uncovers the history of the sentient inhabitants of the planet, both alien and human, which gives clues to why the “Aurora” was shot down and how to prevent the same thing from happening if he wishes to leave Planet 4546B.

The player’s survival depends on 4 main gauges: Health, Food, Water, Oxygen. The Food and Water gauges deplete over time and can be restored by consuming certain items. Health may be lost due to attacks by hostile entities and can be restored by using First Aid Kits. The capacity of the Oxygen gauge can be increased by equipping gear. Oxygen decreases gradually while the player is submerged and is replenished by resurfacing or by boarding a vehicle or functional habitat. Complete depletion of any of these gauges eventually leads to the death of the player, upon which the player will drop all items from a non-secured inventory and respawn at the last known safe-house.

Generally, the player has 360° freedom of movement underwater, allowing for extensive exploration to be carried out. Materials can be gathered, by picking them up or by hunting creatures inhabiting the ocean, which can be used in crafting equipment, vehicles and items to widen the range of actions the player can do. The player is may choose to develop a seabase which can provide perks in the way of upgrades, resource finding, ensuring survival or just purely for aesthetics. 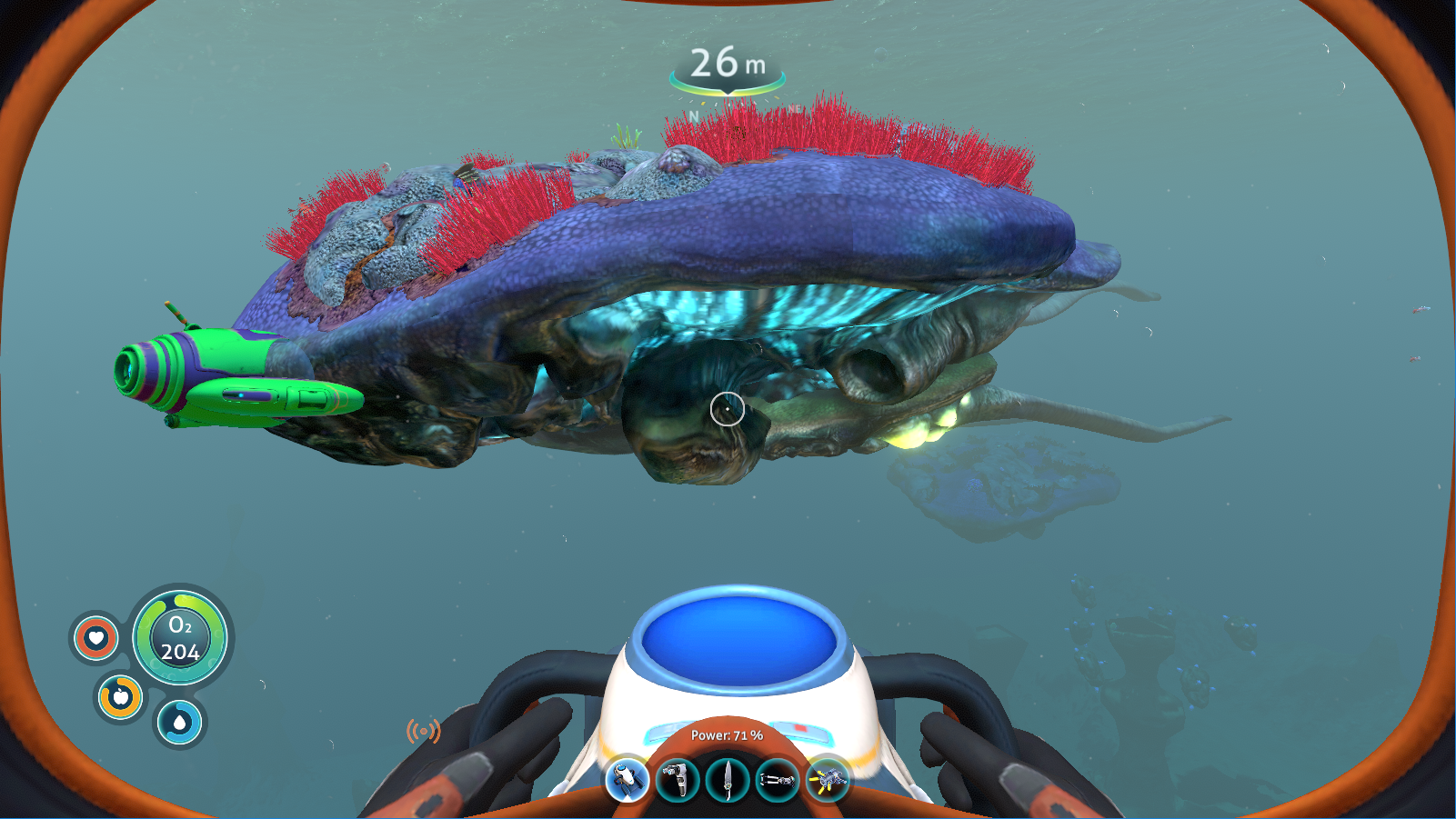 Subnautica’s graphics is excellent in the way that the design of the creatures themselves let the player intuitively infer if it is a predator or not, and that the fauna’s size ranges from small critters to humongous leviathans. As the player progresses deeper into the unknown, creatures start to look more foreboding and dangerous, much like how most people would perceive such creatures of the deep, amplifying the instinctual trepidation people have of the unknown. Paired with the sounds and cries made by these entities, an immersive experience is created which evokes emotion of awe, mystery, tension and fear in the player. The use of lighting is kept to a good balance and the depths of caverns out of reach of sunlight is sufficiently lit which allows the player to enjoy the scenery and atmosphere while not being frustrated at being unable to see.

Subnautica is developed in Unity and is available to play on PC, PS4 and Xbox One. It may require a PC with slightly higher end specifications for optimal gameplay with best graphics.

The player has a survival PDA which contains an AI that talks to the player when certain events occur. While it does sometimes give a dialogue or hint which is essential for survival, it can also give somewhat witty and humorous responses. One such line quoted from Subnautica when the player successfully leaves Planet 4546B, “Welcome home to Alterra. Permission to land will be granted once you have settled your outstanding balance of: 1,000,000,000,000 credits.” These small snippets of humor coming in now and then, sometimes at unexpected and inappropriate moments, keep the player entertained and breaks the monotone of seriousness at much needed times.

The ultimate goal of Subnautica is for the player to escape from Planet 4546B. The player is constantly reminded of this goal both visually and audibly. The burning wreck of the “Aurora” visible on the horizon and the audio log files discovered serve as anchors to keep the player conscious of the desire to leave the planet. Even without following the story mission prompts, the player will inevitably come across key pieces of information and hints which aid them in their escape from the planet while exploring. Every milestone reached towards the final goal is rewarding on its own as it unlocks more avenues of exploration and surprises for the player. Knowing what happened in every part of the story from start to completion gives the player a sense of satisfaction and a goal to work towards to.

The player is free to choose how to play Subnautica and what kind of experience he is looking for. Choosing the type of equipment and upgrades to use, whether to run or to fight and so on. Even if the player decides to use resources to create a base which is aesthetically pleasing but largely useless otherwise, it is possible to disassemble the base to get back 100% of the resources used with the only loss being time itself. This allows the player have the freedom to do what they find fun without it having strong repercussions on the gameplay when progressing through the story later on.

Apart from Subnautica being one of the few games which happen almost entirely underwater, another aspect which gets people hooked in the gameplay is its story. The story itself serves as the foundation of Subnautica. It subtly explains many things about the game while being believable for the players. For example, because it is the late 22nd century and technology is extremely advanced, the player is able to create so many things from raw materials with just a tool called a fabricator. For interested players, data can be obtained while playing which goes in-depth to explain the design of lifeforms by including evolutionary factors relating to the environment they are found in. 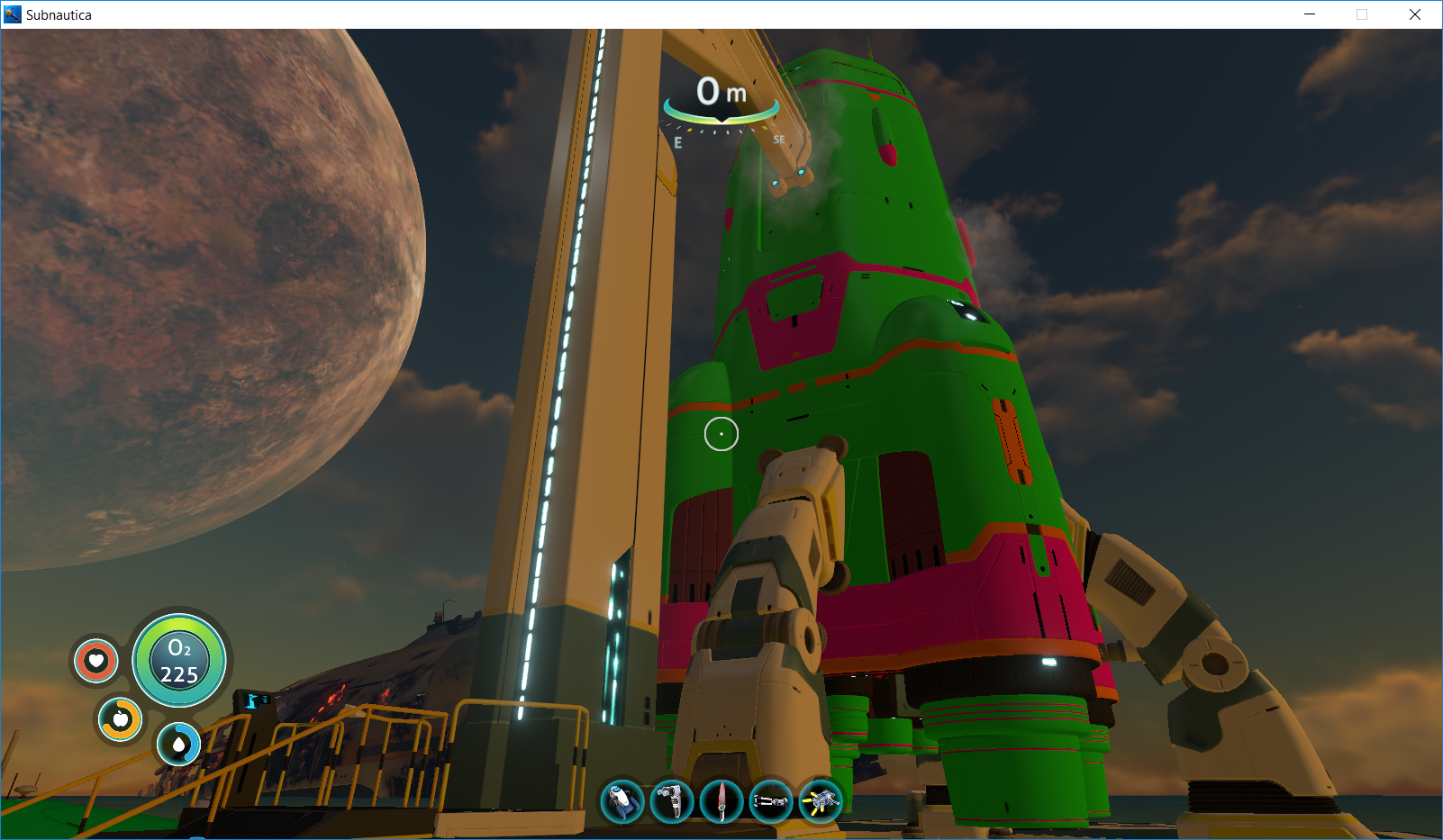 Overall, playing Subnautica on PC has been a really enjoyable and immersive experience. The storyline and all the additional data available to players to explore freely left me with a feeling of fulfillment upon completion of the game. This fascinating world has an element of elegance which naturally draws people in and has without doubt, become one of my top favorite games to play.