Hearthstone is a free-to-play online collectable card game developed by Blizzard Entertainment. Recently entering open beta in late January 2014, Hearthstone pits players head to head in a 1-on-1 card battle, similar to existing card games, for example, Magic: the Gathering. The object of the game is to take your opponent down to 0 HP, and players can do so with the aid of minions, spells or weapons.

In a strategic game like Hearthstone, knowing the rules of the game is a key component in playing the game well. By knowing the mechanics, players will be able to optimise their game play.

An example of this is the Battlecry mechanic, which takes place whenever a minion is played from the hand onto the field. However, getting a minion with a Battlecry effect onto the field by other means will not trigger that effect.

To ensure that players are certain of these rules, Blizzard has been very specific in the wording on the tooltips and even the cards themselves. Some of the terms used in the game like minion(referring to any creature on the playing field), hero(the player’s character in the game) and character(both minion and hero) have been clearly defined and worded on cards. Emphasis is also put on words ‘ALL’ so that the player is clear that these effects affect both parties.

It goes without saying that Hearthstone is a competitive game, since players are battling each other out in every game they play. However, Blizzard has implemented several modes of play so as to cater to the different competitive levels of the player.

Firstly, there is the Ranked mode, where each win brings you closer to ranking up, all the way to the Legend ranks. This provides players with a goal; to get the best rank they can possibly get. This mode matches players of similar ranks, so that players are matched based on relative skill levels.

There is also the Casual mode, where players can practically match-up with anyone else. This is useful for anyone trying out new decks, or for players to have just started and not want to jump straight into Ranked play. This mode also has a matchmaking system which matches players by their skill level.

Lens of Luck vs Skill

Mad Bomber can even damage you!

Players can mitigate the need to draw the right cards by simply having more cards in their hand. This is a term known as card advantage, where the player with more cards has a higher card advantage, simply because he has more options to play his cards. In Hearthstone, certain cards have mechanics that allow for additional card draw, but are significantly weaker than their similar cost counterparts, and it is up to the player to manage when to go for card draw, and when to play more efficient cards.

As a virtual game, Hearthstone also uses effects where the results are random. This gives the game more uncertainty and leaves things to chance. However, these effects take place when cards are played, giving the player control of when these random effects happen, and this is where skill and strategy comes in. 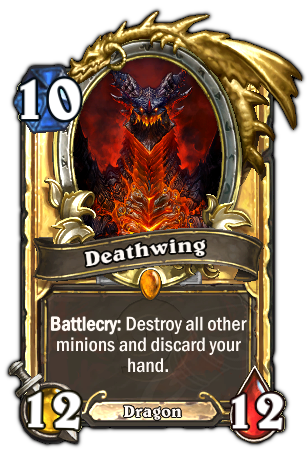 As Hearthstone is free-to-play, Blizzard makes money from players purchasing packs of cards with real currency. Like in other physical card games, cards have varying rarities. This gives the cards an endegenous value, as players gradually expand their card collection by opening more card packs. Cards of the Legendary rarity are hardest to find, but are the strongest and have the most devastating effects. Card packs can also be obtained via in-game gold, but this takes a much longer as time is spent to earn gold. As such, the endegenous value of cards in Hearthstone is a reward for investment, be it monetary or time.

Hearthstone has had several major patches in which cards have been changed due to balance issues. An example of this is to a card which gives all friendly minions Charge, an ability that allows a minion to attack on the turn it is played. In combination with high damage minions, players were able pull off a One Turn Kill combo to win in a single turn without the opponent being able to react. Blizzard then decided to change this card so that this effect now affects minions of 3 or less attack power, so that the card does not lose its effect entirely, but also removing the One Turn Kill.

Cards of the Warrior One Turn Kill combo