Persona 5 is a Japanese role-playing game developed by P-Studio and published by Atlus. It features a high-school protagonist who was put on probation for an assault case where he was wrongly accused. He later finds out of another world called the Metaverse that is born out of the subconscious desires of humanity. Together with his new found friends, they create a secret vigilante group known as the Phantom Thieves of Hearts with the goal of eliminating injustice in society. With the power of their Personas, they “steal” the hearts of malicious adults and cause them to repent in the real world.

The Lens of the Elemental Tetrad
Aesthetics
The game uses an excessive amount of red and with the white and black supplementary colors, brings out an aggressive color theme. This theme is emphasized heavily as can be seen from the UI and text. Together with a comic-like text style, the game produces a bold and eye-catching interface. This bold use of colors caught my attention and even though it was striking at first, I eventually came to appreciate the uniqueness, character and beauty of it. This kind of theme is never seen in other games and is definitely a fresh and welcomed change to many gamers.
Apart from its beautiful interface, the game uses songs that will get players hook on to the game. The songs used tie in very nicely with the player’s current situation as it brings out emotions fitting of the scenes. 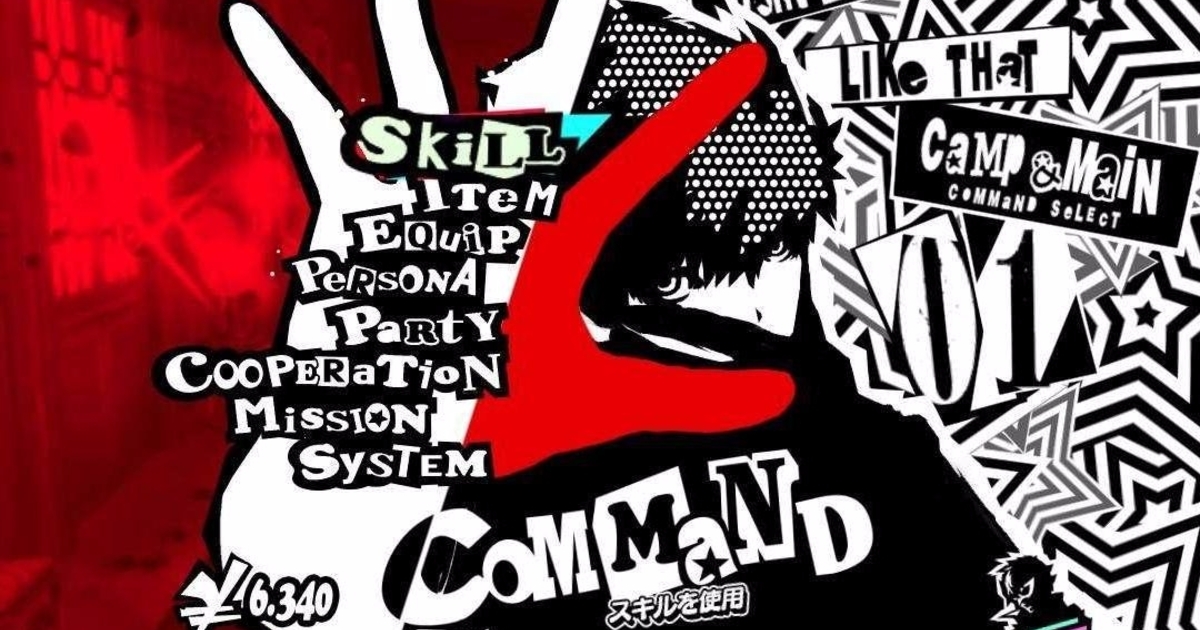 Story
Persona 5 story revolves around a protagonist who was wrongly accused for a crime he did not commit. It follows the events of the protagonist as he gets on with his social and academic life in Shujin Academy. As the story progresses, he gets to meet more allies, known as Confidants, and eventually realized that they share a similar fate with him. Being victims of an unjust world, they set their minds to stand up against the injustice of society.

Mechanics
One of the main mechanics of the game is the deadline for each chapter, where the game will be over if the objective is not met. There are also social stats and relationships that have to be leveled up to unlock more content to the story and all this has to be done within the deadline.
Also, this is a turn-based strategy game which hinges heavily on exploiting enemy weaknesses and certain technicalities that allows for dealing more damage. Within each chapter / dungeon, there are limited save points for the player which adds on to the difficulty of the game. 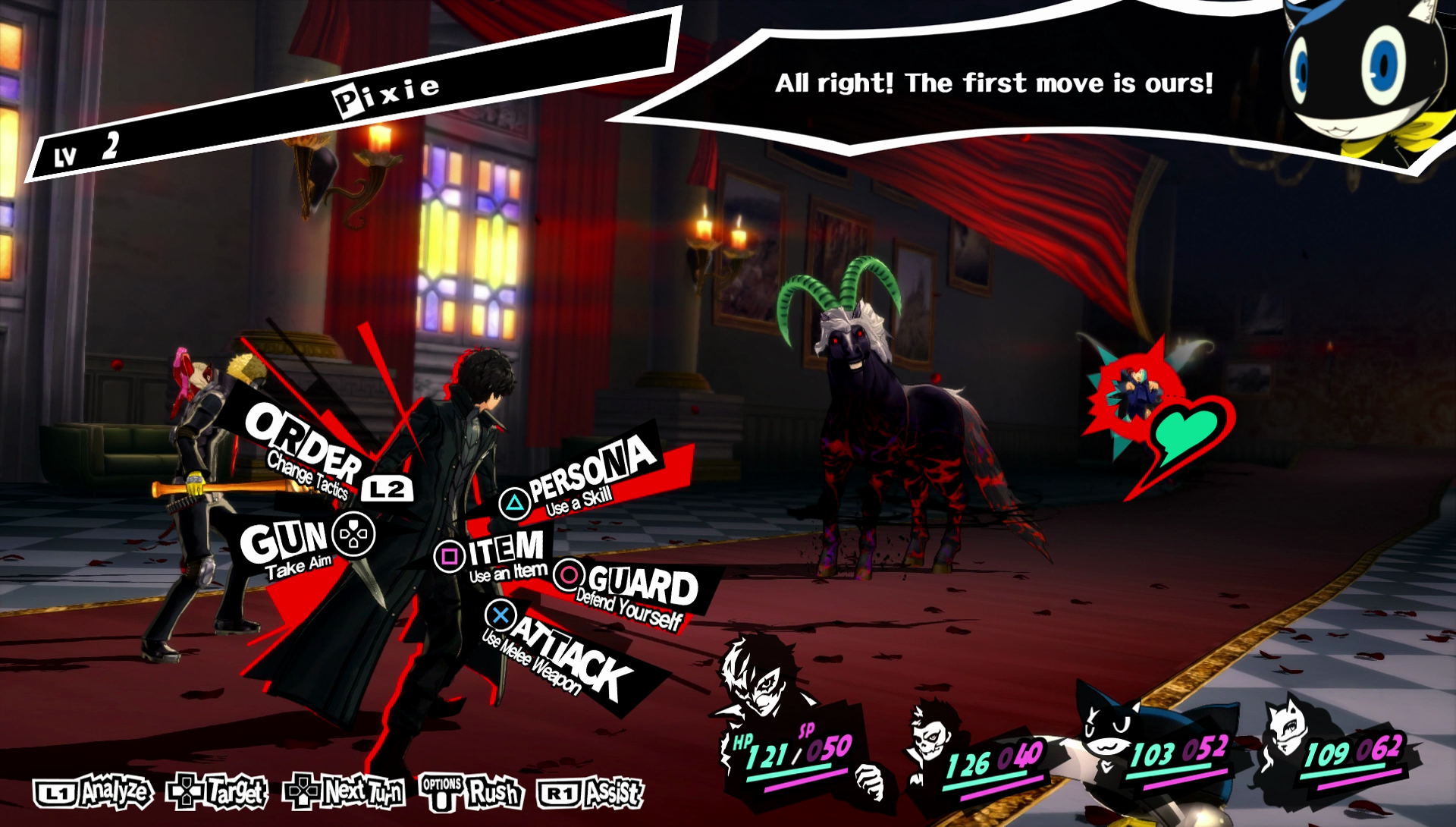 Technology
Persona 5 is exclusive to the PlayStation 3 and PlayStation 4. The graphics is drawn with an anime-like style and objects are less detailed. This means that it is not as graphically intensive as many of the other AAA games. It uses a game engine that is created internally by Atlus and also Criware for development.

The Lens of Curiosity
Persona 5 instills curiosity into the players by showing bits and pieces of information every now and then in the game. Some conversations are carried out vaguely with no proper explanation. In an attempt to find out the truth, it motivates me to play the game to get to the ending. It constantly reminds players of these questions and leak more information at further stages of the game. What makes it special is the vast number of questions it plants into players and how eventually all these questions comes together to form a bigger picture. One such question occurs when the protagonist gets introduced to the Metaverse. The game claims that the protagonist needed rehabilitation in order to not step into the path of ruin. This concept is reinforced at many different junctions and the game is not quick to release any information on it. Finding out the truth to these questions is one of the many highlights of the game.

The Lens of Challenge
The biggest challenge of the game is the need to race against time. Due to the deadline and the limited number of actions a player can do within a day, it is essential that one spends his time wisely and plan for the days ahead. I find this important as accomplishing it will allow me to unlock more story content.
Besides that, the limited number of checkpoints within the chapters / dungeons means that I have to be on high alert throughout the dungeon. One small mistake will result in the frustration of having to restart from the last checkpoint. To make it more challenging, players are unaware of the weakness of new enemies and would have to figure them out as they encounter more of them. Furthermore, enemies use the same combat mechanics as the player and they are capable of exploiting the weakness of the characters in the party. A normal enemy encountered in the dungeon can potentially cause the game to be over.

The Lens of Skill
Persona 5 required me to be pro-active in finding out the weaknesses of new enemies so that I can exploit them during a fight. There is a system in the game which allows for Persona fusions (i.e. combining enemies obtained during combat to produce new Personas / enemies), so that one may know of the weaknesses of new enemies that are to be encountered in a later dungeon. With these knowledge and coupled with other technical skills during combat (e.g. wind skills doing more damage on a burned enemy, all out attack), a player can easily gain the advantage in the fight. On top of that, there are enemies with no weaknesses and enemies that are prone to exploiting status benefits. These enemies required me to think on my feet and adjust my strategy accordingly. I find myself getting better at the game as I played more of it as I understand more of the combat system, strengths and weaknesses of all my characters. The Lens of Character Transformation
Persona 5 is filled with many different characters with many different unique background stories. One of the main highlights of the game is spending time with these characters and finding out more about them. Many a times, these characters are not what they seem to be. These changes are conveyed through sequences of dialogue options and giving different responses will garner different reactions from the characters, which makes the exchange seem more realistic. As the characters slowly open up to the protagonist, I get to learn more about them and start to empathize with their situation. The different hardships that many of them go through are very relatable to the protagonist and they tie in strongly with the theme of the game where the weak is oppressed by the injustice of society.