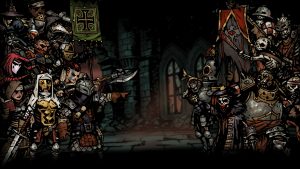 Darkest Dungeon is developed by Red Hook where the player manages a roster of characters, called Heroes to conquer and cleanse dungeons. However, it is not a rosy adventure: the game is designed to constantly exploit the player’s carelessness and severely punish him for it. In Darkest Dungeon, Heroes do not wear shiny armours who triumph over their enemies; they are survivors who have witnessed the true horrors. 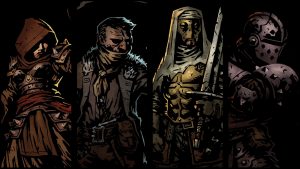 Darkest Dungeon is heavily inspired by the Lovecraftian genre for its aesthetics and writing style, with slight gory depictions thrown into the mix. The art style uses 2D Sprites with a stylised heavy outline, with the white of the eyes rarely drawn and gives each character a sense of weariness, hopelessness, and mystery. They exude grim, desperation, but also conviction; perhaps the three things needed when death is always around the corner.

This review excludes mechanics exclusive to DLCs and focuses on the basic version of the game.

Undeniably, Darkest Dungeon mechanics is arguably its main selling point. It is a well-designed, complex and interlinked mechanics that work together to create a vivid experience of an unforgiving adventure. 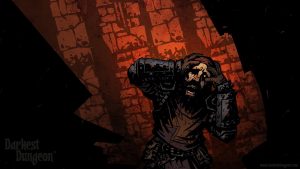 At its core, Darkest Dungeon is a turn-based strategy, dungeon crawler game. It is about making the best out of the worst. As stated in the disclaimer of the game: `Quests will fail or must be abandoned. Heroes will die. And when they die, they stay dead.` Essentially, actions are permanent. Characters are designed to be, at a moment of carelessness, wiped out by the enemy. The game punishes you for every mistake you make. This causes every decision taken to be significant and keeps the player to be on the edge. 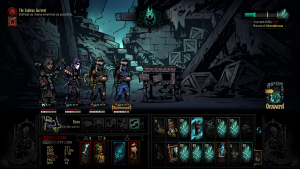 Darkest Dungeon introduces stress bar(white bar), in addition to the usual health bar. Stress is, as the name suggests, the amount of stress the character is going through. Characters can gain stress through a myriad of causes such as triggering traps, witnessing horrors, get affected by specific enemies’ abilities, or even by being in a prolonged fight. Here is the deal with stress level: characters will experience instant death—regardless of health or buffs—once the character hits the maximum level of stress. In addition to putting another layer of strategy of avoiding stress(especially since there are very few abilities that counter stress), this mechanic keeps enforcing the idea of how gruesome an adventure can be.

Personality of Each Character 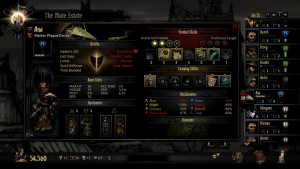 Each character is unique in Darkest Dungeon. In addition to the usual lineup of information: name, equipment, and class, the game introduce Quirks. Quirks are buffs/debuffs that can affect the character both inside and outside adventures. It can be as basic as +5 DODGE to being Kleptomaniac (chance to steal loot from the player). While it serves as game mechanics, these traits are personal to each character. Traits give them their own identity and enable the player to be more emotionally invested with them. With the permanent death system in place, this makes losing them in the dungeon hurts even more. 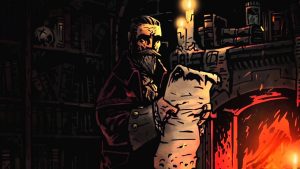 The story begins with one of our predecessors grew bored of living lavishly and decided to spend his fortune away to study the unknown and excavate countless dungeons buried away under his estate. In doing so, he mistakenly released monsters and horrors from within. Workers going insane, missing and countless encounters with abominations—it was only time before the estate is overrun by the vile creatures. In his hopelessness, he sends a plea to the player to clean this mess and reclaim the former glory of the estate before it is too late.

But that is not all. Bits and pieces of information are scattered across the dungeons as journals left behind by unfortunate adventurers who were unable to make it out. Collecting these journals is as hard as it gets since players must sacrifice inventory slots that can be filled with life-saving supplies or precious loots.

Darkest Dungeon runs on Windows 7+ with the minimum requirements as follows: 2 GB RAM, Open GL 3.2+ Compliant, and has at least 2 GB available space.