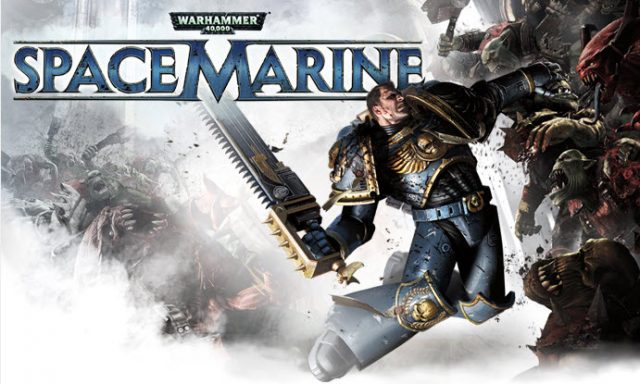 Warhammer 40,000: Space Marine is a third person shooter, hack-n-slash video game that was developed by Relic Entertainment and published by Relic Entertainment. The game was released in North America and Europe in 2011 for Microsoft Windows, PlayStation 3 and Xbox 360. Warhammer 40,000: Space Marine offers players a choice of playing the game in a single player story mode or its online team multiplayer mode.

The game takes place in the 41st millennium, about 38,000 years into the future, where most of humanity has united itself under the rule of the Emperor of Mankind and conquered countless of planets across the galaxy. The player will play as a Space Marine – a hulking, genetically-engineered superhuman soldier. Donned with one of the best armours humanity has to offer, the player and other fellow Space Marines are charged in defending humanity and its territories from the hostile alien forces and traitorous humans that defected from the empire in favour and worship of daemonic entities. 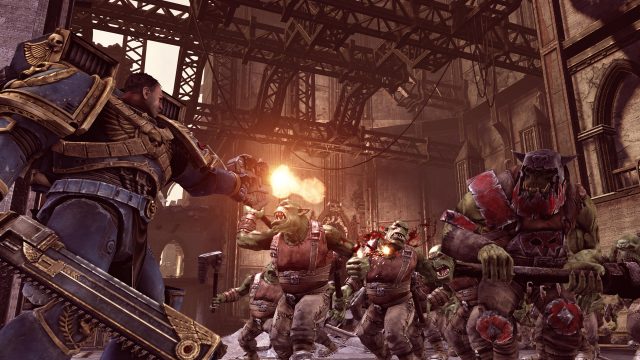 The Lens of Elemental Tetrad 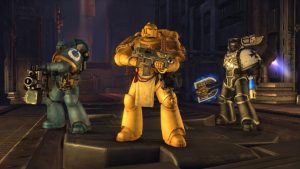 In this game, the player can choose to play as Space Marines or Chaos Space Marines, evil corrupted versions for their former counterparts, to fight other players or the player can choose to play with other Space Marine players as a same team against AI-controlled teams of Orks and Chaos Space Marines (similar to that of the single player mode). In either mode, the players will be put through multiple stages in which they must slay the opposing team and capture various objectives. The players will have access to an assortment of various weaponry and equipment that will greatly augment the Space Marine’s tactical combat prowess. This arsenal of war gears allows the Space Marine to be tailored to the player’s favoured playstyle and adapt to various situations accordingly. The players can either choose to engage the enemies in close combat, shoot the latter from afar with guns, or even do a combination both. Although the players are unable to jump or crouch normally like what most first-person shooter games offer, they can perform a dodge roll which allows the Space Marine to evade certain types of projectiles or melee attacks. 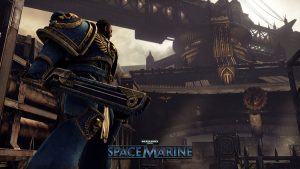 Being set many years into the future, Warhammer 40,000: Space Marine is mainly portrayed in a dark industrial, science fiction setting with heavy aesthetical influences from the Lovecraftian genre. Characters in this game are usually armed with at least a form of weapon or protection, filled with scars, wear and tear or surgical marks. In addition to that, gory injuries and deaths are also repeatedly shown throughout the game – to depict the state of constant warfare and the brutality of it the game is set in. 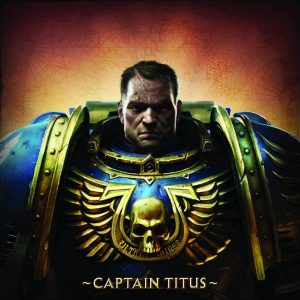 In the single player campaign mode, the player gets to play as Captain Titus, a Space Marine of the Ultramarines, a hardened war veteran of countless battles and skirmishes. Leading a company of Ultramarines, Captain Titus is tasked to liberate an Imperial Forge World, a planet dedicated in manufacturing of various machines and devices for humanity, from the alien Orks and the forces of Chaos.

Although the story of this game is linear and pre-scripted, it is packed with interesting twists and unexpected betrayals. With that aforementioned, this mode serves more as a tutorial for users to get familiar with the gameplay mechanics and game’s lore and setting at the cost of its replayability – which is more than compensated for by its multiplayer mode.

However, despite it not utilizing any advanced or unique technology for its game development, Warhammer 40,000: Space Marine still managed to appeal to its target audiences through its rich lore and aesthetics as well as its flexible gameplay mechanics. 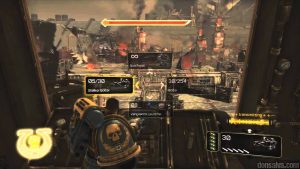 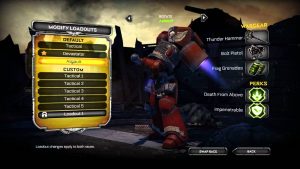 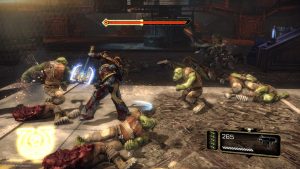 The Lens of Challenge #31 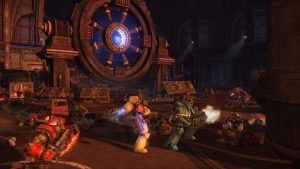 The Lens of Cooperation #37