Don’t feed the monkeys is a digital voyeur simulator game. This game allows you to “spy” on people (or in this game, monkeys) that you don’t know of. As a player, you can observe people’s dialog and use the environment around them to get the info you would like to know. 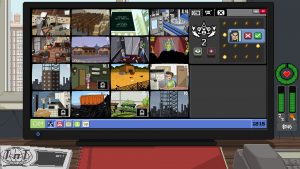 Even though we don’t want to admit, we always have the curiosity toward other people’s life (especially personal life which is hidden) In this came, the developer caught that part of the people’s personality and developed this interesting game. People have surveillance camera which can see what other people are doing in their own home and they could even record it and sell it for money. They provide the player the God mode and make you feel that you could control everything in this game which is both unique and addicting. 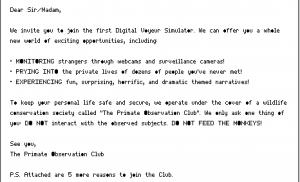 As a player, you can easily find surprises in this game. The game developer tried to make this game realistic. By that, I mean each person in this game has his or her little secret that needs to be discovered by the player. As an example, the person who delivery food for you have a sharp knife on his back which is hard to see and then there’s an option “tip this guy $3” or “you can go now” I personally just tip the guy but there might be other options when players click on the second choice. 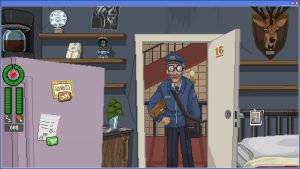 As we know “play is manipulation that indulges/satisfies curiosity.” As a player, we always want to discover something new. This is the idea behind this game. You can buy more camera to spy on more people and each person that you spy on will give you different feedback.

In this game, you can always earn and spend your “money” in game. Each cage cost $50, go find a job as a dishwasher will earn you some money to afford your living. You will find that the currency in this game is truly useful. 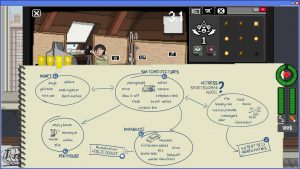 As you can see, this game doesn’t have a fantastic screen display. As a matter of fact, compared to other game that came out around the same time, this game’s display screen is somewhat old fashion. It’s low pixel and low quality. And in this game, there’s no multiplayer competition but you can always find fun in this.

There are some interesting little story in this game, for example, a well-known singer is about to die within several days but he has a wish of publishing his last album and you can decide whether you want to help him achieve his final goal or not.

In fact, this game uses a lot of vivid colors to make it looks more interesting

It doesn’t require any additional devices so it suits for most of the computers.