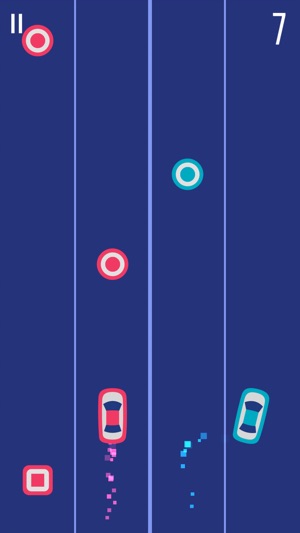 Description: It is a offline one player game. You control the two cars on each side with two fingers. The goal of the game is to get as many circles and avoid all the squares. The flow of the game will get faster as time passes.

Mechanics: the screen is divided into two for each car and again into two lanes. On every lane, there is a vertical flow of square or circle blocks along the road. Players control each car by tapping on either side of the screen, which switches the lane of the car. The game ends when any car hits a square block, and the goal is to hit as many circle blocks as you can before the game ends.

Story: There is no story in this game.

Aesthetics: There is a calming blue background which helps to contrast the bright colored circle and square blocks. The two sides also have their own distinct color for better differentiation. The aesthetic is simple and easy to look at.

Technology: There is no technology needed to enhance the experience of this game.

Lens 1 Essential Experience: the experience that the players are led to is that of driving cars on the road while trying to hit some items and avoid some items along the way. As the speed of the flow increases with time, players can feel the rush and excitement of an increasing challenge. There is also an experience in multitasking when players have to look out for and control each of the two cars individually.

Lens 2 Surprise: There is definitely the element of surprise throughout the game as the placement/timing of the square and circle blocks are unpredictable and users have to respond fast to what they just saw.

Lens 5 Useful Rewards: There is a sense of accomplishment when players manage to hit the circle block as that contributes to the game score. Hence the players are led to keep seeking that goal.

Lens 6 Problem Solving: the problem solving in such a one-player game would be to beat your own previous high score.