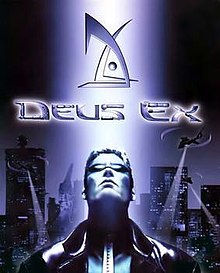 The cover art of the game Deus Ex

The original Deus Ex released in the year 2000 surprised the first-person shooter world by combining complex role-playing elements with the smooth combat afforded by Unreal Engine at the time. It, along with the Elder Scrolls series went on to define the role-playing first person genre and destroyed the notion that fantasy or science fiction games had to be straight or “on rails” like many games at the time. The game went on to spawn multiple sequels which were mostly successful. 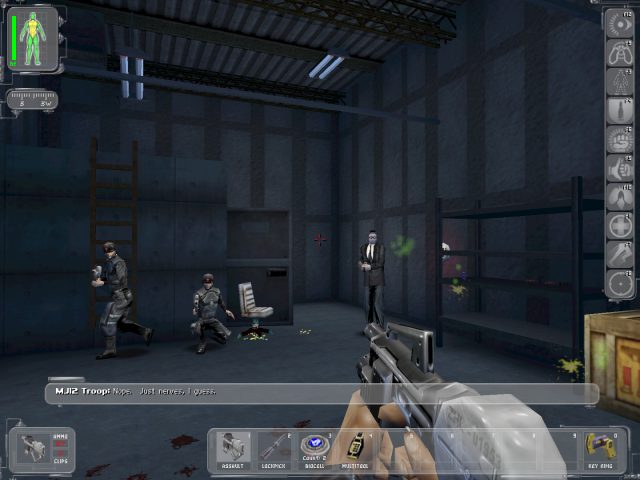 Gameplay – The player engages some enemy soldiers. Note the UI elements. The element in the upper left represents player health, which compartmentalizes damage done the body, At the bottom is the quick inventory and ammo counter. On the right are various augmentations(skills) that can be activated.

Analysis of Game Elements Through Lenses

Deus Ex is set in a dystopian future where science has allowed humans to modify physical aspects of themselves – through augmentations. The story follows JC Denton who is a member of an international peacekeeping force called UNATCO who is tasked to neutralise terrorists that are attempting to steal medicine meant to treat an ongoing plague that has infected thousands.

However, things are not as they seem. Throughout the story, the player can uncover the dark sinister truth not only behind the plague but also about who really controls the world. The story is easy to follow with the game’s AI characters ready to fill the player in on more details should they choose to ask the appropriate questions and an information vault mechanic that keeps track of various story elements the player has discovered. This is combined with the intricate, branching, emotion rich drama sequences filled with betrayal, deceit but also catharsis, camaraderie and a sense of accomplishment after completing each plot thread and seeing them coalesce into the games different endings. I’d say this fills the Lens of Expected Value and Meaningful Choice.

The setting, characters and conflict are completely believable elements to exist in the conflict of their time with most story threads leading to resolutions that satisfy the player.

Deus Ex was visually unappealing for the time. The Elder Scrolls series among other games had better graphics, however the game made up for the lack in fidelity with other aspects.

Firstly, the environments were true to life and realistic. The game takes the player on an international trip with locations such as the poor districts of New York, the ostentatious streets of Hong Kong, the lavish estates of Paris. Each environment is huge for the time and no space is wasted. Each corner may have a different kind of secret or story bead to follow. A dark alley might reveal a vendor, fun challenge or lead to a sewer laboratory where a clandestine government agency is experimenting on homeless people for nefarious purposes. Lens 2: Surprise and Lens 4: Curiosity can be said to be satisfied here.

Secondly, the audio. All the dialog sequences in the game are voiced well and audio cues such as footsteps, gun sounds, doors opening etc, were the best at the time. Being a role-playing game this element is critical to develop the mood and emotions that a player might feel to the environment or develop a connection to the game’s many characters.

Thirdly, the UI. The UI might feel cluttered and janky today with it being fixed in resolution (thus the higher the res you run your game on the smaller it becomes) but for the time it felt appropriate that a super-augmented police agent would have a UI that presents everything at his disposal in little boxes at the edge of his screen. Perhaps it was the influence of science fiction of the time such as Robocop.

Lastly, the mechanics. The game allowed a player to progress in different ways not just in the story but in combat sequences as well. Different skills and augmentations allowed players to approach conflict and resolve them in unique ways, whether it be a stealthy takedown or avoidance of enemies, guns-blazing invincible super soldier-like romping, remote hacking of computer systems and robots that do your job for you or dialog. Yes, dialog is THE most important mechanic of this game. Often conflict can be resolved or made significantly easier if you walk around and talk. That bum on the street may just know of a secret passage into that heavily guarded enemy hideout…(Lens 6: Problem Solving)

Combined, these basic elements lend to a very engrossing and replayable game, with each playthrough teaching players new areas or tricks they may have missed out if they played differently. The only part of the tetrad missing is technology. It can be argued that the decision to base the game on Unreal was a good decision as it has been ported to almost any device that can run the Unreal engine such as consoles and mobile phones.

I hope other appreciate this game as I did back in my childhood.