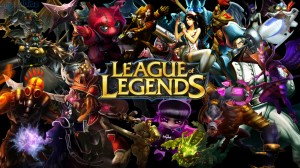 Developed and published by Riot Games,Leagues of Legends is now one of the most popular multiplayer online battle games in the world. This game is played by 2 teams of people with maximum number to five for each. There are totally about 120 different champions for players to choose. On the classic Summoners Rift Map, there are three roads, top, middle and bottom, connecting the two opposite teams’ base; each side owns three turrets to guide each roads. Players will gain experience points and gold by killing opposite players, neutral monsters, opposite turrets and minions that spawn and attack the other team regularly. With gold and experience points in battle, players can buy items and increase skill points to strengthen their champions. The game is ended by destroying the last structure on the map, then enemies’ “Nexus”.

In Leagues of Legends, the skill is really an important element that makes this game fancy. All the champions have 1 passive, 3 basic and 1 ultimate skills. Instead of just pressing the keyboard and attacking enemies automatically, players need to aim properly, decide when and which skill to use; sometimes even the order of champion’s skills can make a difference. Besides that, each player needs to kill as many minions as possible to get more gold for items while fighting against enemies. Some professional players know what items are the most suitable for their champions, and they may also choose certain items based on what their enemies have.

A skilled player is even able to carry the whole team and win the battle, which does earn respect and esteem from other players. For each champion, it takes time to be professional, and there are totally 120 champions(the company is always continuing to produce new champions). That is why people keep playing Leagues of Legends again and again.

Competitive games can satisfy the basic human urge to determine who is the most skilled player. Leagues of Legends provides such a fair platform for two teams to compete with each other. When doing the matching of two teams, the system tries to make their average level as balance as possible. As the consequence, the result of a battle is not predictable. Sometimes the team appears stronger at the beginning may lose in the end.

There are several modes available for different kinds of players. Those novices can join some tutorials to gain a better idea of how the game is running. After that, they can join the “Co-op VS AI” mode, which matches players against bots team. Besides the novices, experienced players can also join this mode to practice their new champions.

In Leagues of Legends, players need to queue up for few seconds to start a new battle. Before queuing, people could invite their friends to be in the same team. If there are no friends online, players will be assigned to teams with strangers randomly. During battles, people could meet new people, and build friendship with them.

During the battle between the two teams, cooperation is always the priority. Typically, players have different role in the battle: one in the top road(can also be two), one in the middle, two in bottom(one will support the other by healing, watching for invasion) and one doing the “jungle”(this player will kill those neutral monsters to gain gold and experience in battle, and at the same time assist three roads if possible). Usually, after about 20-30 minutes, two teams will gather together for the team fight.

In the game, players is able to chat by typing and use some quick warning(for example, holding Alt and click Left click of mouse) to inform the danger at a particular position to other teammates. Nowadays, Leagues of Legends also supports a tool for players to talk to each other online.

Regardless of winning or losing a battle, each player will gain different amount of experience points and influence points based on their contributions to that battle. Players need experience points (out of battles) to increase level, which can be up to level 30. The benefit of gaining levels is to unlock Mastery Points and Rune Page slots which improve slightly the overall strength of the Summoner’s chosen champion in-battle. In Leagues of Legends, champions and runes can be purchased by either the influence points, which can be gained freely, or riot points that can be gained by paying real time money only.

Players are able to meet and make a lot of friends in Leagues of Legends. During battles, people need to either type or talk to their teammates in order to cooperate, through which them begin to have connections to each other. Usually, after a specific battle, players will send friends requests to those who are skillful or kind to people. Then they can fight together in another coming battle. It is certainly very enjoyable to make new friends and fight with them.