• Introduction
League of Legends (LoL) is a Multiplayer Online Battle Arena game which is similar to Defense of the Ancients (DotA). For every game, each player will get to choose a character, also known as champion and are teamed alongside with other players to destroy the enemies’ base. Similarly to DotA, the players earn small amount of gold passively during the game and by killing minions and enemies’ champions. After each game, players will earn experience points after each game which allows them to level up their Summoner (personification of player) till a maximum of level 30. Gaining levels will unlock mastery points and tune slots which help to improve the overall strength of the player’s chosen champion in-game.

• Lens of Character Function
– Every champion is unique in their own ways. They play different roles in a game too
– There exist several character functions such as the junglers, assassins, fighter, mage, support, tanker and marksman
– For instance, a support champion naturally plays the role of healing wounded allies and strengthening their stats, such as providing them with higher defence or speed for several seconds. They can also be used to stun the enemy champions to buy time for their allies to escape. A good such support in LoL would be Sona 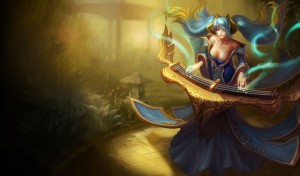 – Not only should a team have well balanced characters, they must also decide which champions should run the top, mid and bottom lane, depending on the functions and equipment, for more advantages

• Lens of Competition
– LoL is a Player VS Player (PVP) or Player VS Bots game
– Playing with bots will be pretty boring for advanced players as the enemy bots are very predictable since they are programmed to do their every action
– Each game in LoL PVP is a trilling competition since every player have different playing styles
– and thus, playing frequently and gaining experience is really important for serious competitive players as they must be exposed to different styles and learn how to counter them

• Lens of Cooperation
– Nobody plays to lose, especially in a team game. Therefore they will be more pressured to contribute to the team in one way or other
– It is important for teammates to look out for one another’s backs and help each other to escape whenever their champion is at the brink of death
– Newer and weaker players usually are more selfish and complain a lot during the games, especially when other players make a kill steal (KS) or they will fight over which lane to use
– On the other hand, stronger and experienced players cooperate to take down enemies together even though they did not get the kill, they will offer the lane to someone who needs it for than their champion
– Communication is very important when playing LoL. Most of the time, I would sign in to Skype to talk to my other teammates about the strategy we should employ in the game according to the way our enemies play

• Lens of Skill
– LoL is not really a difficult game once you get a hang of it. Most of the time, a win and lose is highly dependent on the players’ skills on how they use the champions and good teamwork
– A team with an extremely skilful and strong player and four other weaker players can still win a team of five average players and of course, it also depends on how well the other team can cooperate too
– Memorising all the skills and abilities of every champion is definitely a plus point as you can predict and avoid the incoming attacks
– The timing to stun opponents and to use skill shots on them is really important as well. For instance, one of my favourite champion Anivia, has a skill called Flash Frost which flies really slowly for a short distance in a straight line, thus I must always predict the movement of my enemies before firing Flash Frost, a hit can damage and slow down the movement of enemy champion by 20% for 3 seconds which is very crucial for the enemy to escape and for myself to take the kill – Adding on, players should also know what to equip their champions during the game. Strong players know how to vary the equipment used during late game, while less experience players would google their champion’s guide beforehand and follow the recommended equipment set

• Lens of Chance
– In every game, there bound to be some chance and luck too. Although LoL is a game that depends on skills, players do have chances to finish off their enemies even though it seems near impossible
– http://www.youtube.com/watch?v=hiu5quoGvoU
– In the above Youtube clip, it portrays the chances that the champion Ashe has to finish off opponents from far with her Enchanted Crystal Arrow. The players must be really skilful in estimating the timing to make those kills – Furthermore, equipment such as the Phantom Dancer allows the champion which wields it to have an increase chance of 30% critical strike which is extremely crucial during a 1-1 battle in game

Although chance plays a part LoL, I believe that experience players, who balance their team well with the correct champions, along with good teamwork and skills can still dominate the game. All in all, I believe LoL is a well-balanced game of fun and skills which is why they are extremely successful in the gaming industries. They are rumoured to be able to be on par with DotA or even surpass it.