A business simulator where you have to lead a transportation company through many game-years of development and competition against other companies, human or AI. Competition is for profits and status, as well as the market share of your industries.
You have to build transport links (trains, road vehicles, ships, airplanes) between factories and cities, each supplying a certain kind of cargo. Then you put vehicles on these links to periodically go through your orders, performing a primitive operation (like loading/unloading, transfering cargo) at stations.
Originally released in 1991 by Scottish developer Chris Sawyer, has undergone substantial improvements and growth in complexity. As of late can be used for online play, which is how I have personally drained many hours on this game. The lens of Economy

Economy is the main driving force of the game. You spend money to build your infrastructure, and earn it from the deliveries. The earnings you use to further develop by upgrading railroads or airports, buying new vehicles or improving your links.
Money might be too easy to get. Initially you can take out a loan, and when the business kicks off, there’s an ever increasing income. However, the game can escalate into a fierce, fast-paced building competition whereby running out of money could ruin the fun, so this is not really an issue.
A rather accurately implemented inflation and interest rates, as well as the ability to buy shares of other companies and bribe local councils give a very realistic, dynamic experience.

The Lens of Judgment

Players are judged by economic performance indicators, such as income, operating profits, units of cargo delivered, company value, etc. This results in a status (president/chairman/chief executive…); a higher status gives you a fancier house. All players are given equal opportunity and starting conditions, and they can compare their success or failure to other companies. The game is completely transparent, i.e. you can see the financial situation and infrastructure of others, which is a good motivation to do better.

I have played with both complete novices and die-hard veterans, and skill does have a big influence on the result of the particular player.
The game’s success was mainly driven by its railway building system, which gives an unparalleled degree of freedom. Mastery of the signalling systems determines the efficiency of your network and your revenues. The picture shows a highly sophisticated railway system, built by someone from the forum community. These people are very tenacious about perfecting this craft, and articles such as http://blog.openttdcoop.org/2009/12/30/efficient-stations-and-tight-packed-train-streams/ are in good supply. There has even been a paradigm shift from “point-to-point forth and back deliveries” to circuit-like networks, which are more efficient but harder to convert to a different rail type.
Although learning curve is steep, fun starts already at the lower stages of the curve, so no one is cast out. The game also offers alternative channels for the players’ creativity – people enjoy building beautifully engineered railways (like above), or developing cities, or keeping up a theme like eco-friendly or a soulless corporation. All these different gameplay courses co-exist on the same game map, so players of different skill level can enjoy each other.

Transport Tycoon starts in year 1930 and goes until 2030, when following a victory announcement you can keep playing for as long as you like. A year in-game takes around 20min in real life.
During this course, several autonomous developments take place: 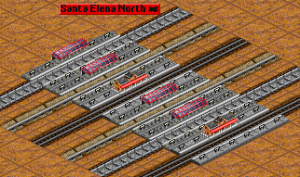 All these mutations give a temporal dimension to the game, letting you anticipate progress and preventing boredom. In addition, the graphs from above record a history, so you can see your performance in retrospect.
I think the game’s time handling is integral to the experience. It takes you through the growth of a world whose architect is you yourself. By the end it feels like a lifetime has passed, and you have become familiar with all the cities, terrain and competitors. Saving the game after completion is like taking a photograph of this experience that you can later revisit and reminisce.

The Lens of Problem Solving

Transport Tycoon is played in an isometric world, and you have to lay your railways, roads, and sometimes carve water channels manually. Some tiles don’t allow certain variations of rail, so figuring out how to get from point A to B can be a headache and a creative exercise – “is it better to build rail over the mountain and let trains slow down, or build a very expensive tunnel?”. Landscaping, bridges and tunnels are your primary tools of navigating the world that you have to combine to achieve the best efficiency and cost.
One type of industry is banking, and banks are built in large cities in later stages of the game. The problem is that it’s awfully difficult to build a station close enough, as cities are very restrictive to demolitions. Solutions include pre-emptively building a station in larger towns at the start of the game, before they’ve grown into a city. In this case you have to solve the problem of predicting which cities will grow, and where a bank is likely to be built. Or bribe the council to allow demolition.
Then, there are primary (mining) and secondary (processing) industries. You have to manage the delivery chain to ensure ample input and output of resources, and that you’re not accidentally fueling a competitor’s factory.
Solving these problems is a great source of fun and competition.