Ark: Survival Evolved is an open world survival RPG based on an island full with dinosaurs. The user starts out stranded on an island and has to learn to survive on the island. As you level up, you unlock blueprints to craft equipment aiding in housing, combat and also dinosaur taming. There is no explicit goal and the player determines his own objective from building giant fortresses to exploring every caves on land or underwater and even being a dinosaur breeder. The game offers choice of official PVP, official PVE, player-owned and solo servers to let players play according to their taste.

Aesthetics: The game is in 3D with realistic artwork ranging from the island to water effects and also heavy emphasis on limited lighting when night time comes around. This lends to the feel of actually being stranded during the first few in game days of play when you can only craft a wooden torch for lighting and have limited sight range during the nights.

Mechanics: The player not only has health and stamina like standard RPGs, some unique attributes to Ark includes hunger, hydration, warmth and oxygen. The game tries to include realistic aspects of life with limited technology at the start: harvesting wood and stones to make your first set of tools like hatchet, pickaxe and spear for self-defense; harvesting bamboo and wood to build your first hut; killing fishes or dodos and even dinosaurs for meat and cooking them on campfires for sustenance. As player levels or explore, they unlock blueprints for advanced technology and eventually are able to utilize modern technology like GPS, auto-turrets and electrical appliances like lamp posts, refrigerators and lamp posts. 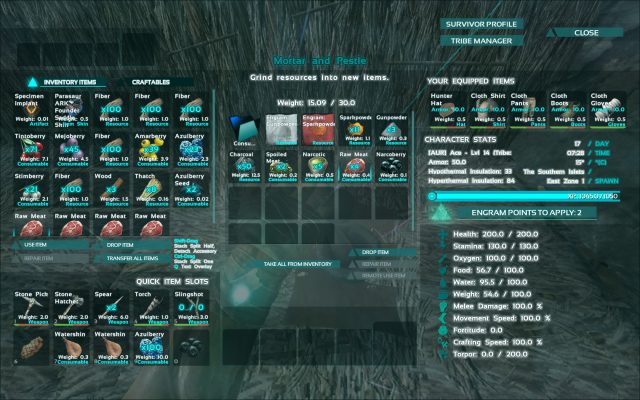 Story: There isn’t much story other than the player being stranded on an island trying to survive. The player determines their own story be it being an explorer, a builder or dinosaur tamer. In PVP servers, there are aspects of territorial control and invading other tribe’s fort to loot their spoils or staying on the low and settling down in areas with heavy foliage to avoid other players. Ark: Survival Evolved revolves heavily around dinosaurs and mythical creatures. There are 142 different creatures reported, with 119 of them released as of this review. Some of the well-known ones included the triceratops, T-rex, mammoth, Yeti and even sea creatures like Megalodon. The different creatures have different levels of aggression ranging from passive and are okay with you getting close to extreme aggression where they will try and eat you upon sighting you. Most of the creatures can be tamed by knocking them out through tranquilizers and tamed with food. The larger creatures can be equipped with a saddle once tame to allow you to mount them. There are flying and sea-dwelling creatures, a vast variety.

Lens of Curiosity: The user starts out with nothing and can see maybe a few different creatures near their spawn location. However, survival is of priority and the player is restricted to keeping themselves alive first. The player is able to swim near the shore as much as his oxygen allows and catch fish for food. It is possible to see Ichthys (dolphin-like creatures) swimming near the shore and circling the player playfully or meet hungry man-eating piranhas that attack you. Also, you can see creatures flying about in the air and also notice that the areas you explore on feet is extremely small in comparison to the in game world. This teases the player to level to reach a point where he can survive comfortably and tame dinosaurs to let him explore the land faster making use of the speed of various tameable creatures to fly from point to point. If dinosaur taming is too tough for the player, they can unlock blueprints for the raft early on in the game and explore the perimeters of the island by sea or even check out smaller islands nearby to harvest resources or just to sight-see. Lens of Triangularity: High risk, high reward and low risk, low reward is a huge aspect of the game regardless of server choice. While the player can choose not to tame dinosaurs, the player will have limited carrying capacity and strength. This limits how fast the player can gather resources and bring back to fortify their base or further research. With creatures, players can share the load of the resources between themselves and their mounts, also, some creatures like the triceratops are capable at gathering berries, allowing them to harvest multiple times faster than by hand. Even in choosing which dinosaur to tame, to get a stronger tame, you have to be able to knock out the creature first.

One of the best tameable creature is the Giganotosaurus (players call it Gigan in game). It is 25 times more durable to tranquilizers than the triceratops at level 1, becoming even more resistant as its level increases. On top of taking a long time to tame and having to try and survive while taming it, the aggressive nature of the dinosaur maintains even after being tamed. If a player’s Gigan takes too much damage, it can go into Rage mode, flinging it’s rider off and dealing increased damage to any living things near it for 20 seconds, regardless if they are ally or foe.

Lens of Freedom (#79): Ark is open-world without an explicit goal for the player. A common way for players on cooperative servers to collaborate is through having players doing specific set of jobs. Those who are more into taming dinosaurs will help tame dinosaurs for the tribe for various purpose. Those who are interested in crafting and gathering can bring these tamed dinosaurs out to gather resources like metal, gold or oil and create building components for the builders. The players who are more interested in building can then take these components and improve the fortress to house more dinosaurs or provide more comfort for the tribe’s characters. In fact, a player can choose to do any of the above mentioned task, albeit this means that progress in any aspect will be slower since the player has to improve each and every aspect. Player made content via UE4 editor can be uploaded on Steam Workshop for downloads and it ranges from new structures to sounds and game mods. Lens of Risk Mitigation (#16): As much as this game has a great concept and won various awards, the developers, Studio Wildcard failed to pre-empt optimization problems and also hacking issues. The cost for the realistic graphics took a toll on how smoothly the game runs and there are various reported glitches like dinosaurs clipping through structures or the ground and disappearing or starving to death in inaccessible spots. Also the problem of hacking is not handled well enough to the point that many players have trouble keeping their progress in PVP servers since hackers can level a person’s fort in matter of minutes. While the developers sometimes do mass banning of known hackers, they have not been able to fully prevent hackers from increasing their own damage or enabling god-mode. This makes the PVP component much less enjoyable and kind of restrict the game to cooperative, private or solo servers.

Ark: Survival Evolved costs $29 on steam at its default price but there is a free-to-play, micro-transaction driven Chinese server launched by snail games China on 1st of January 2017 at the following site: http://ark.woniu.com/