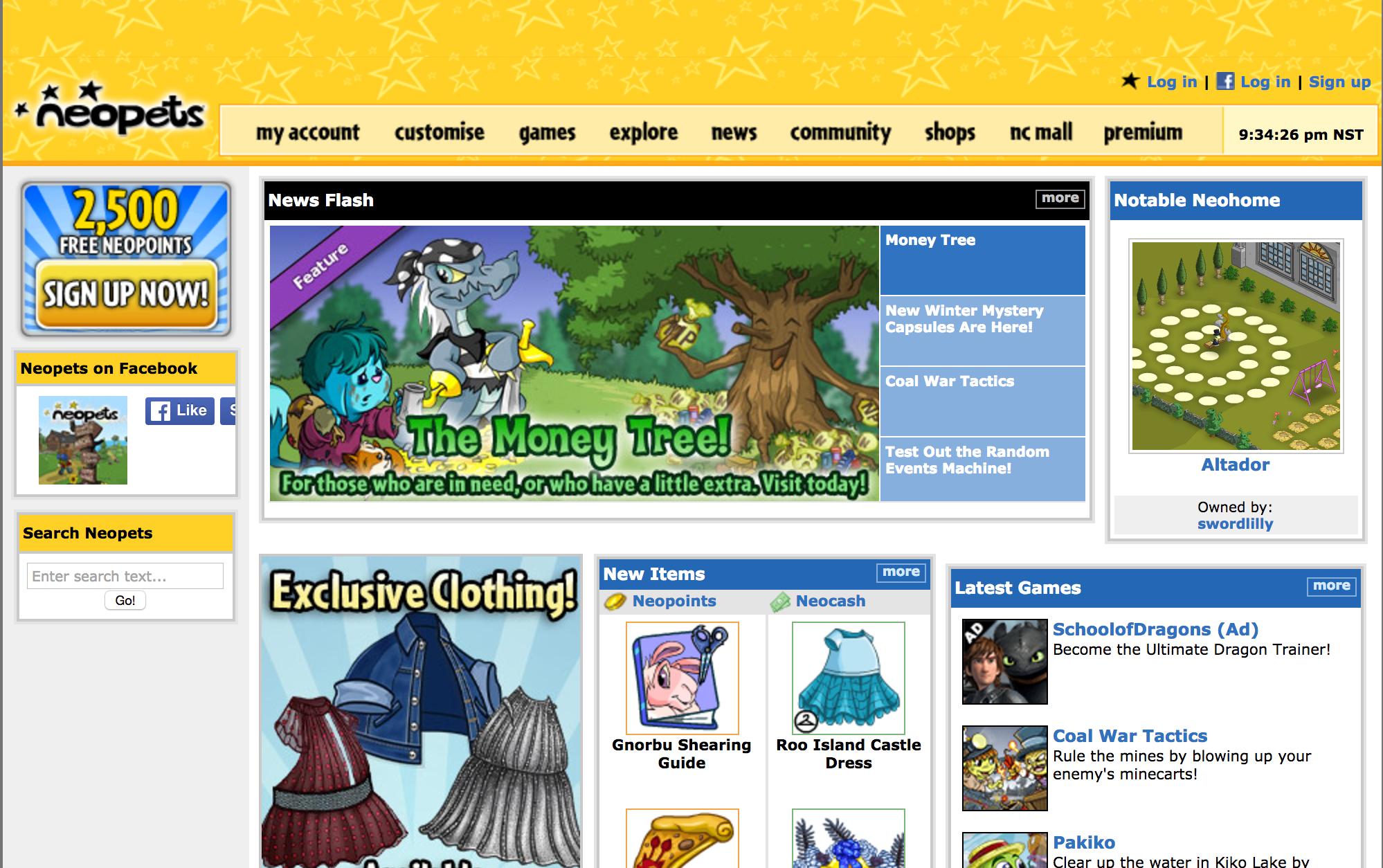 Neopets allow players to rear virtual pets called Neopets and explore the virtual planet, that Neopets inhabit, named Neopia. Players are expected to feed and care for their Neopets when they get hungry or ill. They can also interact with their pets using items such as books or toys purchased with virtual currencies known as Neopoints which can be earned through playing games.

The lens of the Element Tetrad

Neopets was launched in 1999, where user can play with just a web browser and Adobe Flash Player.

The technology used was simple and remained so till date. This thus eliminates problems such as lagging and would cater to most players.

Neopets was targeted at kids, hence the mechanis was simple but yet is a reflection of the real world. Players will have to earn money through playing games to purchase items such as food and medicine to care for their virtual pets. Money can be placed in the bank and interest can be earned. Players are also able to build customizable houses known as Neohomes for their Neopets.

There are also different themed lands on the planet which players can explore. Each themed land has their own games, attractions and shops.

Neopia runs on its own calendar, economy and stock market.

Neopets has cartoony 2D graphics that is suitable for all ages.

While navigating between different pages, the ‘Something has happened!’ box may appear at the top of the page randomly, but not often. It may bring unexpected fortune or misfortune upon the player or it simply does not have any impact.

Players are unaware of such a situation beforehand. Sometimes, it may bring super rare items to the players and this is where the element of suprise comes in. 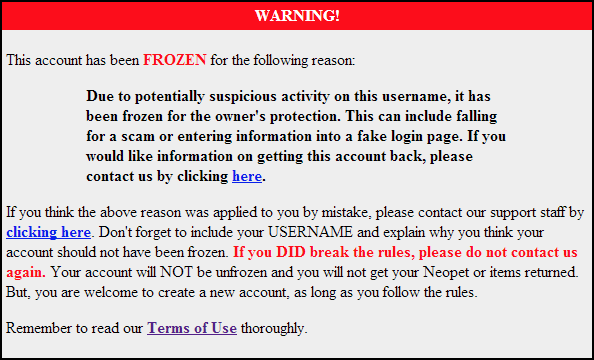 In Neopets, there are certain items that are available for free once per day per account. If users are found to make duplicate accounts to exploit this system, users will have their accounts frozen. The items and Neopoints will not be returned.

The Lens of Secret 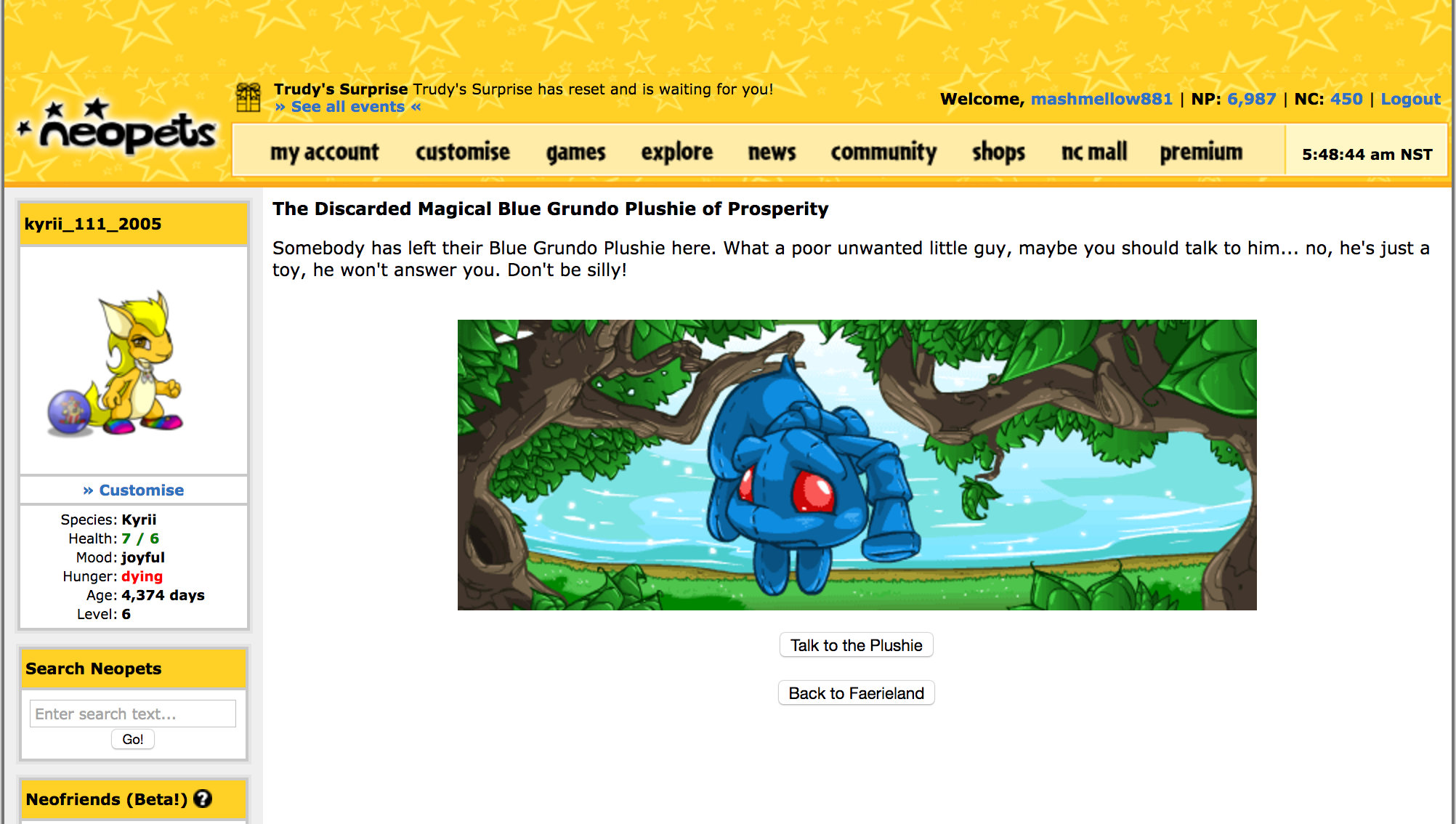 There are some hidden locations and gameplay in Neopets which cannot be found on the map itself. These gameplay are usually magical and can provide the user with benefits.

The Lens of Fantasy 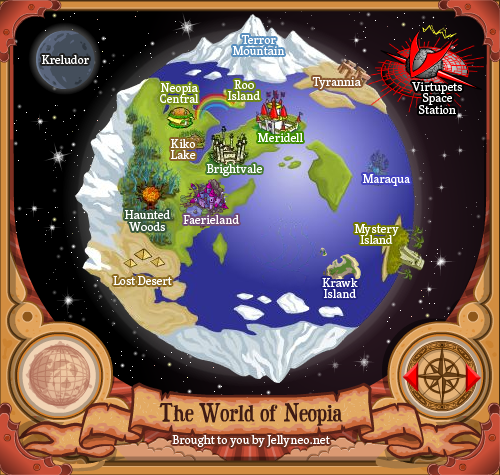 There are many themed islands on Neopia. Each island has different attractions, shops and games. It mainly fulfills the fantasy of children whom wants to live in a fairy land, underwater or in a haunted woods.