After the success of Don’t Starve, Klei Entertainment developed a multiplayer version of the game, Don’t Starve Together, officially released in 2016. The resource gathering survival-based game features players placed in a cartoon-drawn wilderness world where players aim to do the very thing the title says: Don’t starve. 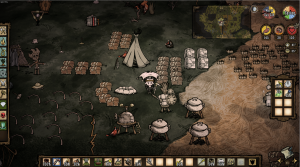 Don’t Starve Together on Steam

Story: Unlike the original game, Don’t Starve Together does not explicitly feature a novel on it’s own, but for the most part, it can safely be assumed to have a similar plot to the base game. A magical nightmare throne capable of trapping people indefinitely in a dimension known as The Constant subjects the characters to a constant fight for their life, forcing them to die again and again but never truly killing them.

Mechanics: Players start out with virtually nothing and aim to survive against overwhelming odds in a world where health, sanity and hunger need to be managed on top of the race for resources, harsh climates and dangerous monsters. By gathering resources to construct tools, players can progressively become better equipped for survival and face new challenges.

Aesthetics: The Don’t Starve series is unique with its cartoon-style 2D graphics in a 3D world. While it does not feature sleek 3D models with shiny surfaces that modern AAA-titles tend to have, Don’t Starve (Together) is able to compensate with their cute animations and great design.

Technology: Don’t Starve Together starts players off with primitive tools such as axes and spears, but through progression, players are able to unlock access to magical tools and weapons such as the Ice Staff/Weather Pain.

Lens of Punishment (#41): Don’t Starve Together can be seen in a way as hardcore Minecraft, as deaths are much more punishing and monsters are capable of inflicting greater levels of damage, not just on the player, but their base (E.g Beargar) and hence progression as well. When a player takes too much damage in Don’t Starve Together, they are now forced to play safely or commit time to regaining health, or risk dying and being put out of the game for a significant amount of time, along with becoming a burden to fellow teammates, who now have to revive the fallen player.

Lens of Visible Progress (#49): Progression is highly visible in the game, determined by the state of the player’s camp and the gear that they have equipped. As players gather resources and unlock new technology in the game, they are granted the satisfaction of upgrading their tools and ability to survive with greater ease as well as combat stronger foes.

Lens of Freedom (#71): Don’t Starve Together’s sole objective is to survive, by any means necessary. The game was designed as an open-world game, where players are given the choice to pursue personal goals for further progression. One could choose to explore the whole map for the best location to settle down, or quickly get a base up and running so as to proceed with other challenges.

Lens of Feedback (#57): While Don’t Starve Together is largely unforgiving, there is a fair amount of feedback in the game itself that aims to help the player. For example, the player character issues warnings when there is an imminent Hound attack. The crafting menu highlights in green what items the player can craft with the materials they currently have. Examine options also assist the player when they discover a new structure or item. It is clear that while Don’t Starve Together is built for endless replayability and skill in survival, it provides adequate feedback to the player for learning the game without having to refer to external sources.

Lens of Time (#39): One of the toughest challenges in Don’t Starve is managing time in the game. As it is heavily based on resource collection, players are encouraged to prioritise and choose to pursue goals that they deem most important at that point in time. Every in-game day feels like a rush to achieve objectives, but at the same time, the presence of seasons provides some leeway for players to manage their long-term plans. Spring/Autumn are deemed as friendly seasons with plentiful harvest while Summer/Winter are harsh seasons, having temperature as an additional hazard. Don’t Starve Together is beautifully balanced with its periods of worry and relaxation despite it’s unforgiving nature.

Lens of Skill (#27): In order to do well in Don’t Starve, one has to master the core mechanics of the game. Learning how to manage one’s inventory, kiting to avoid taking too much damage as well as efficiency in time management can heavily influence the success of the player throughout the game. In Don’t Starve, players are meant to learn by playing, dying and repeat.

Lens of Competition vs Cooperation (#38): All the previous lenses apply to Don’t Starve Together as they do to the original base game, but here is one that is special to the former. With more mouths to feed and more hands to work with, Don’t Starve Together had to be designed and rebalanced for teamwork, to accommodate multiple players working together to survive while maintaining the challenge that is core to the game. One of the more significant changes is the modification to monster health, with most mobs having their health doubled and in some cases tripled as compared to the original game. Nonetheless, the multiplayer experience grants the opportunity for experienced players to guide newer players through the ruthless environment that is The Constant while allowing all to have fun.

Although the title implies a focus on cooperation, Klei has incorporated the choice for a competitive environment in the form of Player-vs-Player mode. This brings the original game of Don’t Starve to another level, as players are now issued a whole new challenge, with actual competition for resources and threats that no longer attack in patterns like the computer-controlled monsters that players are used to.

Conclusion: All in all, Klei’s willingness to listen to popular demand has resulted in the release of Don’t Starve Together, an amazing game built off an already brilliant one that highlights the great design decisions associated with modifications for multiplayer.