Assassin’s Creed Odyssey (ACO) is a single-player action-adventure roleplaying video game developed by Ubisoft Quebec. The game is set in during the Peloponnesian War between Sparta and Athens in 431 BCE. Players get to play either a male or female mercenary seeking to reunite their family and along the way get embroiled in a cultist plot that would shake the entire Grecian world.

ACO faithfully replicates the architecture, environment, weapons and clothing of the era while reinventing some designs to appeal to the ‘supernatural’ aspect of the story. The natural environment of the game is expansive and immersive, with the flora and fauna varying depending on the location. For example, farther south of the map, the environment is more desert-like and the architecture likewise looks more worn down compared to the islands farther up north. Extensive research over architecture and clothing was carried out in order to make a convincing and detailed classical Greece. The characters themselves are all highly detailed and realistically modelled to the point where even the color of their veins are distinct.

The main story follows a Spartan mercenary that was thrown off a mountain as a child and forcibly separated from their family because of a conspiracy. The child escapes to an island and grows up under the care of a local swindler. The child grows up to become a mercenary and is tasked to assassinate their father. Along the way they uncover an entire plot to control the entirety of Greece and the same plot that separated their family in the first place. As the mercenary embarks to reunite their family they take on the extra responsibilty to take down the group behind the conspiracy. The stakes become higher as they find out how influential this group is.

The game contains role-play elements such as dialogue options which affect certain endings and interactions. However, most options only give the illusion of choice. Other role-play elements include skill trees, character customization, combat system and the new ‘War System’. The War System allows players to fight on behalf either Sparta or Athens, alongside soldiers on the battlefield and help the states secure territory. The bounty system from the previous game is carried over to this game. Players have the option of taking on bounty contracts and if they gain enough notoriety, through criminal activities, they will be pursued by bounty hunters. Naval combat is also carried over from the previous game.

ACO was made with AnvilNext 2.0 for the Xbox, PC, PS4 and the Switch. The same engine was used since 2014 on their eighth game (Assassin’s Creed Unity) and thus graphics and performance remained somewhat the same.

The game provides players with opportunities to induce their projections onto the game. ACO acts as a historical playground for players that are interested in classical Greece and captures the players’ imagination with it’s detail, accuracy (to an extent) and promise of interesting characters. Players would get to interact and work alongside famous figures such as Leonidas, Hippocrates, Pythagoras and Socrates. Players get to meet and brawl with mythical legends such as Medusa, the Cyclops and the Minotaur. 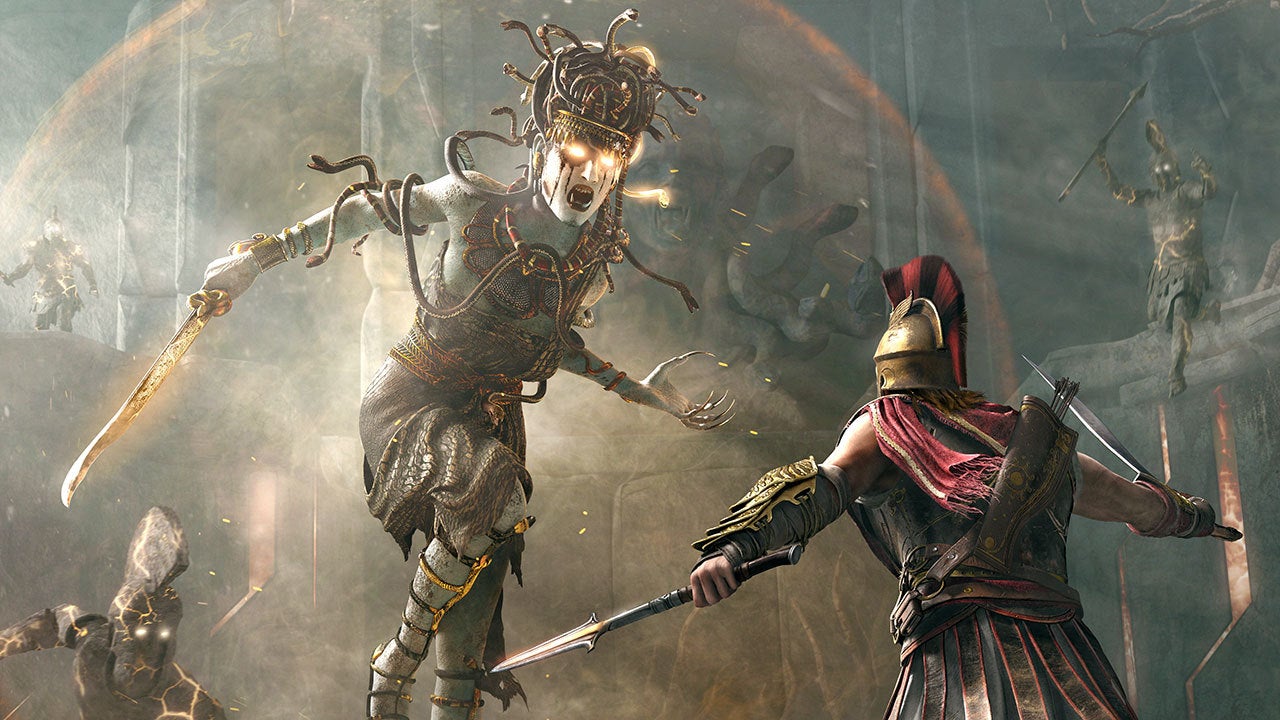 The entire game caters to a wide scope of players; those that are not experienced with games to those that want a challenge. Right from the beginning, players get to chose the type of experience they want, one that reduces the amount of combat and grinding to focus on the story and one that provides a more balanced gameplay. Furthermore, if combat is too easy or difficult, players can increase or decrease the difficulty as they see fit. Furthermore there are multiple playstyles for players to pick if they are not as dextrous with their fingers or not. No penalty is imposed on players for whatever they pick.

Sections of the game require players to decipher riddles, letters and messages and use them to find their targets or continue the quest. Those that find it difficult to decode or aren’t interested in that aspect, can easily chose to skip that section of the game.

There are attempts made by the game to add more puzzle solving to balance out the large amount of combat in the game. There are maze-like tombs for players to explore and uncover treasure. However, due to their ease, are very boring and repetitive.

There are key moments in the game set to evoke strong emotions or come up with big revelations. Major character deaths and character introductions are spaced apart but remain relevant through storytelling to create impactful moments. Key moments have obviously gone through more processing aesthetically to make them powerful. For example, during one character introduction scene, dramatic music plays in the background as the player and the newly introduced character fight in tandem like in an action movie. Such a scene marks the relevance and importance of the character to the player and makes a large impression on them.

Progress is measured by the how much the player has completed the various questlines. Each quest has a recommended level for the player to aim for before continuing. The quests in the Odyssey category are related to the main story and the status/progress of the main story is indicated by the icons under ‘Your Odyssey’.